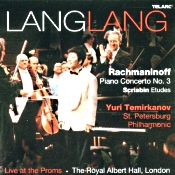 Whatever faults I might have found with Chinese pianist Lang Lang's 2001 rendition of the Rachmaninoff Third Piano Concerto I should probably attribute to the sound of the recording as much as to the artist. Recorded live in August of 2001 at a Proms Concert at the Royal Albert Hall, London, the interpretation is at once lively and volcanic, reticent and withdrawn. Certainly, Lang Lang is a pianist of contrasting temperaments, and he displays it in abundance in this performance, for good or for bad. Personally, I found the performance from both Lang and the orchestra somewhat underpowered compared to the best I've heard, including the composer's mono rendition; but I suspect Lang's fans will find it just right.

As to the performance more specifically, Lang begins it in a relatively staid, reserved manner, and he doesn't begin to allow it to come alive until the final moments of the first movement and then the concluding movement. He executes the slow, second movement Adagio beautifully, however, from beginning to end, and by the time he finishes the entire concerto, things bode well for the Scriabin Etudes and the little Chinese folk song that follow.

The thing is, I've never been keen on live performances, and this disc reminded me why. Audience noises in the concerto constantly intrude upon the serenity of the quieter passages, and then the sound engineers subject us to a burst of applause at the end. Additionally, the piano's image seems sometimes small and distant, sometimes large, wide, and close, with little rhyme or reason as to why. The orchestra often appears soft or muted, to the point you'd think it had disappeared entirely, when suddenly it bursts forth with a strong, dynamic force, making you wonder where it had been all along. Now, understand, I'm all for a wide dynamic range, as long it sounds natural, the way one might hear it at a real, live event, not from a recorded one. Ironically, for a live recording, this one didn't sound to me "live" at all except for the audience noise.

Telarc recorded the Etudes in a studio, and they come off much better than the Rachmaninov in almost every way. Most important, the sound is not only quieter but seems better balanced than in the Rachmaninov concerto. Oh, yes, and then there's Telarc's booklet insert, which is one of those foldout affairs that opens up to nearly two feet across your lap, making reading it a chore.

I've never considered it my job to tell people what to buy, only to provide my reactions to recordings; still, I have to admit that if I were a first-time buyer looking for a stereo version of the Rachmaninov Third Piano Concerto, I'd stick to the tried-and-true recordings from Martha Argerich (Philips), Vladimir Horowitz (RCA), Byron Janis (Mercury), Leif Ove Andsnes (EMI), Vladimir Ashkenazy (Decca), and if you don't mind monaural sound, the composer's own authoritative version (RCA).