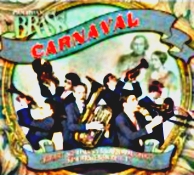 German composer and music critic Robert Schumann (1810-1856) wrote Carnaval, a set of short, solo piano works, in 1834-35. Although various folks have orchestrated them over the years, including a ballet in 1910, I believe this is the first time anyone has arranged them for brass quintet. And if anyone could pull it off, it would be Canadian Brass, the world’s premier exponent all things brass.


Trumpeters Chris Coletti and Brandon Ridenour adapted Carnaval and the accompanying Kinderszenen for brass quintet, nicely maintaining the spirit of both works. Then it’s up to the players to do justice to the transcriptions, and that they do just that. Joining the aforementioned Coletti and Ridenour are Eric Reed, horn; Achilles Liarmakopoulos, trombone and baritone horn; Chuck Daellenbach, tuba; and Caleb Hudson, additional piccolo trumpet and Bb trumpet.


In Carnaval, Schumann portrayed masked revelers at Carnaval, a festive season occurring in mainly Catholic countries just before Lent. Schumann portrays himself, his friends, and his colleagues in the music, as well as characters from Italian comedy. It’s all quite showy and rambunctious, with Schumann going so far as to include in the musical notations an embedded puzzle that he expected people to decipher.


Whether you fancy the puzzle angle in the masked revelers is beside the point; the music is vibrant and colorful, expertly presented by Canadian Brass. I have to admit that there is a certain quality about these pieces on brass instruments that kept reminding me of Scott Joplin orchestrations, yet I mean that in the best possible way; undoubtedly Schumann influenced Joplin’s ragtime creations. The remarkable thing is that these Schumann pieces should work so well with a brass quintet. They almost sound as though Schumann intended them that way, with the added nuances the various brass instruments contribute. Of course, it helps that Carnaval is so vibrant a work itself, with so much energy to expend. Fun stuff, done up in high good spirits.


Accompanying Carnaval on the disc is perhaps an even better-known set of Schumann piano pieces, Kinderszenen (“Scenes from Childhood”), which he wrote in 1838. In the work, Schumann looks back in fond remembrance of younger days. If Carnaval seemed a stretch for brass quintet, Kinderszenen takes things a step even further. Yet, again, Canadian Brass pull it off with an uncommon aplomb, combining their usual virtuosic playing with the utmost delicacy. 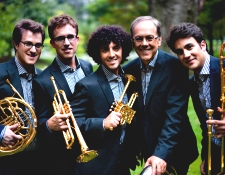 Like Carnaval, Kinderszenen comprises a set of descriptive tone poems, but judging their success in adaptation is another story. The various “Scenes” are more ephemeral than Carnaval, their mood more ethereal and sentimental. It takes all of Canadian Brass’s expertise to pull them off and not sound like a circus band. They handle it well enough, although I wouldn’t want these transcriptions to replace the piano originals. That said, the famous “Traumerei” (“Dreaming”) comes off more tenderly than I would have thought and exemplifies the sensitivity with which Canadian Brass approach these scores.


Producers M.B. Daellenbach and Dixon Van Winkle and engineer Philippe Fages recorded the music for Opening Day Entertainment Group at Christ Church Deer Park, Toronto, Canada, in August 2012. They captured a pleasant hall resonance that gives the instruments a rich, mellifluous sound. With no undue brightness or edginess, we get plenty of detail from the group, plus a good separation of the players. There is also a realistic depth and air around the instruments making the whole affair quite lifelike.