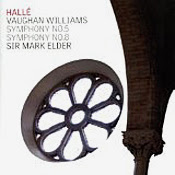 The Halle Orchestra is the oldest orchestra in the U.K. and the fourth-oldest orchestra in the world.  Pianist and conductor Charles Halle founded the orchestra in 1857, and it makes its home in Manchester, England, playing under its current Music Director since 2000, Sir Mark Elder. Maestro Elder is quickly endearing himself not only to me but to the world with his sensitive, engaging musical interpretations. This is saying a lot considering that the Halle has worked under such distinguished leaders as Hans Richter, Sir Hamilton Harty, Sir Thomas Beecham, Sir Malcolm Sargent, Sir John Barbirolli, and others. Here, Maestro Elder continues his series of Vaughan Williams symphony recordings (he’s already done No. 2) with Nos. 5 and 8.


First up is the Symphony No. 5 in D major, which English composer Ralph Vaughan Williams (1872-1958) premiered in 1943 during the height of the Second World War. Interestingly, it represents a departure from the somewhat dissonant style of his previous symphony and a return to the more pastoral atmosphere of his Third Symphony, written some twenty years earlier. Maybe the composer felt that what people needed was a calmer, more tranquil tone at this point in tumultuous world affairs. In any case, the Symphony No. 5 is one of Vaughan Williams’s quieter works.


The opening Preludio is gentle and relaxed, especially under Maestro Elder. It perhaps reflects the composer’s interest at the time in the music of Sibelius, who wrote after hearing it that it was “like a caress from a summer world.” Sir Adrian Boult was the first conductor to play through the score, and Elder’s performance is very much in the Boult tradition. Elder’s first-movement reading is the essence of serene tranquility, with a zesty second subject interjected in the middle.


Elder takes the second-movement Scherzo at an appropriately moderate pace and properly emphasizes its restless contrasts. Then comes the ultra-calm Romanza, which Elder punctuates with an ultraslow delivery. I don’t mean that to sound like a negative thing, however; it’s quite lovely, even though I’ve never heard it taken quite so leisurely before. The final movement, marked a Passacaglia, is a series of variations, which Elder handles well, alternating the tone from calm and otherworldly to happy, triumphant, and exultant. Throughout, the Halle Orchestra play their hearts out; that is, with great apparent affection, as well as precision. 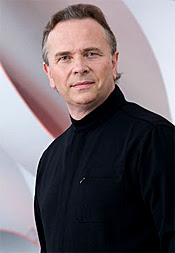 The Symphony No. 8 in D minor, premiered in 1956, is the second-to-last of Vaughan Williams’s symphonies and the shortest of the lot. As it is also one of the composer’s lighter compositions with its exotic combinations of percussion instruments, it makes an appropriate coupling with the Fifth Symphony.


Vaughan Williams dedicated the work to Sir John Barbirolli, and I’m sure Barbirolli would have approved of Elder’s interpretation: It’s most expressive and thoroughly charming. Elder seems to delight in the composer’s use of vibraphone, xylophone, tubular bells, glockenspiel, and tuned gongs, although Elder doesn’t accentuate them extravagantly, with strings alone in the slow Cavatina third movement (which again Elder plays rather slowly). In closing, Elder and company take the finale out in a blaze of heroic glory.


The Halle Concerts Society recorded the Symphony No. 5 live and in rehearsal at Bridgewater Hall, Manchester, England, in 2011 and the Symphony No. 8 at the BBC Studios, MediaCityUK, Salford, England, in 2012. The miking in No. 5 is not too close or too far away as most live recordings get made. It seems just right, yet there is absolutely no sound from the audience (and there is, thankfully, no burst of applause). Overall, we get a warm, slightly soft response that, in fact, suits the temper of the music nicely.


Symphony No. 8 sounds not too much different from the live No. 5 despite the change in venue, if just a tad better defined in the midrange, with a somewhat more extended high end. In both symphonies, the orchestral depth and dynamic range appear moderate, with a touch of hall resonance adding to the realism of the occasion.