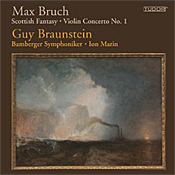 If the rather imposing name Bamberger Symphoniker-Bayerische Staatsphilharmonie sounds only vaguely familiar to you, you might know it better as simply the Bamberg Symphony; in 1993 the powers that be gave it the name the Bavarian State Philharmonic, and they have gone by both names, hyphenated, ever since. More important, if the name Guy Braunstein is also only vaguely familiar to you, he has been the Concertmaster of the Berlin Philharmonic since 2000, stepping down in 2013 to dedicate himself to a solo violin career. The present all-Bruch disc is his first major album as a soloist.


Braunstein chose to begin the album with the Scottish Fantasy in E-flat Major for Violin and Orchestra, Op. 46, written by German composer and conductor Max Bruch (1838-1920) in 1880 and dedicated to the violin virtuoso Pablo de Sarasate. The Fantasy, as you probably know, is Bruch’s survey of Scottish folk tunes, about thirty minutes of them, loosely tied together in four movements.


The Fantasy starts off rather solemnly with an introduction marked “Grave,” which is slow and somber, indeed (listen to the excerpt below), before giving way to the more familiar and frolicsome melodies that follow. Braunstein infuses the opening with a good sense of atmosphere and emotion. The Adagio that follows has an appealing melancholy, which Braunstein never over-sentimentalizes. He ensures the Scottish airs have a lovely lilt, and he sweetly captures the flavor of the Scottish countryside. Then he brings a zesty spirit to the central Allegro and a quiet longing to the Andante. While Braunstein and Maestro Ion Marin give us a grander Finale than we often hear, overall this is a relaxed, broadly comfortable reading, full of charm and good will. It’s quite delightful, actually.


Next up is the Concerto No. 1 in G-minor for Violin and Orchestra, Op. 26, possibly Bruch’s most well-known work. The composer premiered a revised version in 1867, and it’s been one of the staples of the violin repertoire ever since. It has a curious first movement, a Vorspiel (or Prelude) leading directly to the second movement. This Vorspiel is like a slow march, with some ornamental flourishes along the way. Braunstein seems perfectly at ease with the Romanticism of the music, yet in an easygoing, if passionate, manner. 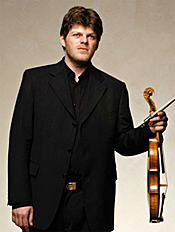 The Adagio is famously melodious and forms the centerpiece of the work. In its broadly sweeping themes we find one of the most soulful of Romantic slow movements. Here, Braunstein plays wonderfully, capturing all of the music’s inner tensions and heartrending beauty. In the Finale Braunstein provides a necessary good cheer without overdoing things, without wearing out his welcome. Instead, his playing is as light and lyrical as the rest of his interpretation. This makes a most congenial, most welcome addition to the catalogue.


Braunstein concludes the program with his own arrangement for violin of Bruch’s 1911 Romance in F-major for Viola and Orchestra, Op. 85. It’s beautifully lyrical, reflecting an earlier age of high Romanticism in its gentle melodies and rich harmonies. Braunstein gives it the same cordial treatment he afforded the previous works on the program, integrating the music seamlessly into the proceedings. As in the rest of the album, Braunstein’s rendering of the Romance sounds beguiling, and a little sadly pensive.


Tudor recorded the music at the Bamberg Concert Hall, Joseph-Keilberth-Saal, Germany, in 2011. They created a hybrid multichannel/stereo SACD of it, and I listened to the SACD two-channel stereo layer. The first thing one notices is an excellent sense of depth, air, and space to the sound. Very impressive. The solo violin is out front, of course, but not too far and, thus, not bigger than life as sometimes happens in these affairs. The midrange sounds clean and smooth and reasonably transparent, the highs fairly well extended, the lows a tad lightweight but adequate. Transient attack is fine, as is ambient bloom. In all, it’s one of the better SACD’s I’ve heard recently.

Email ThisBlogThis!Share to TwitterShare to FacebookShare to Pinterest
Labels: Bruch