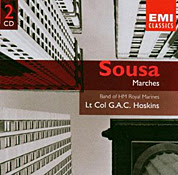 The remarkable thing about this two-disc set is that it contains forty-three Sousa marches. That’s about one-third of the March King’s total output and includes all the marches that Lt. Col. Hoskins recorded for three separate CDs between 1983 and 1985.

The main reason that EMI can accommodate so many of the marches on the two discs would appear to be the brisk pace with which Hoskins and his players dispatch the works. You can call them bracing or exciting or stimulating, but there’s no doubt some listeners will find them speedy. These are marches, after all; just how fast would a column of soldiers have to be stepping to keep up with the music? Of course, they’re concert marches, so the practicality of their tempo is beside the point. Still, they lose a little of their charm when Hoskins takes all of them at so fast a clip.

Nevertheless, they sound nicely recorded, EMI offers them at a low price (under $10.00 many places), and the two discs provide all of Sousa’s most popular pieces plus a number of less well-known ones, covering the entire time span of his march output. Yes, you’ll find “King Cotton” here, and “Semper fidelis,” “Manhattan Beach,” “The Liberty Bell,” “El Capitan,” “The Washington Post,” “The Thunderer,” and “The Stars and Stripes Forever.” But you’ll also find “Powhatan’s Daughter,” “Kansas Wildcats,” “The Royal Welch Fusiliers,” “Marquette University,” “The Northern Pines,” “The Lambs,” “Jack Tar,” and many more. 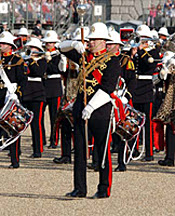 Truly, a little goes a long way, though, especially when Hoskins and his Royal Marine Band hardly vary their pace. I made the mistake of trying to listen through both discs at once and found myself tiring less than midway though. However, I entertained myself further by getting up and comparing the sound of these EMI remasterings to the sound of the first disc of Hoskins’ original CDs I had on hand. The difference was striking. The new discs sound a bit thin in the bass and somewhat top heavy in the treble, but they absolutely sparkle compared to EMI’s first disc, which appeared to have placed a thick blanket across the front of my speakers, it sounded that muffled. So, kudos to the new edition.

It was interesting, too, that the remasterings of the earliest, 1983 recordings, the first fourteen on disc one, seemed to favor slightly the left side of the sound stage, but the ‘84 and ’85 recordings brought the stereo balance back in line. Hey, these may not be the absolute best Sousa performances on record or in the best sound, but for the money they represent a terrific value. And, who knows, taken a few at a time, they may just get your blood pumping, as they should.

Email ThisBlogThis!Share to TwitterShare to FacebookShare to Pinterest
Labels: Sousa