Tune thy Musicke to thy Hart (SACD review) 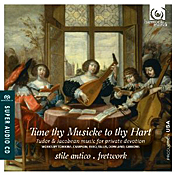 First, a description of the music. Most of us probably think of Renaissance music as played either by minstrels for the entertainment of the masses or by choirs and such for liturgical services. Apparently, however, there was also a good deal of music for private, domestic devotion, secular religious music for use in the home. The present album offers a selection of fifteen songs from the English Tudor and Jacobean eras (1500's and 1600's), played by the English vocal ensemble Stile Antico, accompanied by the English consort of viols, Fretwork.

I liked this line from Matthew O'Donovan, who sings bass with the group, from his booklet essay:  "In hindsight the shaking of the Church music at the Reformation could be said to represent little more than a historic example of evangelicals bringing 'pop' music into worship." Certainly, we hear the overlap of popular, secular, and ecclesiastical music in these tunes.

The singing is a special joy. While there are only about a dozen singers in Stile Antico, they almost sound like a full choir, their voices blending so well, the harmonies so exacting, the tone and timber so precise, so lilting, lyrical, and soaring. What's more, the five members of Fretwork also contribute to the performances seeming bigger than the sum of the participants, Fretwork's instruments lending subtle but solid support. Most of their work we hear during the introductions to the songs and in the purely instrumental number "In nomine a 4 nos. 1 and 2 by Robert Parsons (c. 1530-1570).

The songs offer a unique glimpse into the evolution of music as we know it. But, more important, the songs are beautiful in and of themselves and perfectly executed by all involved. 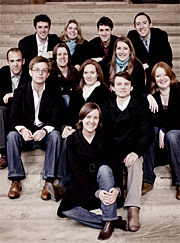 Recorded for SACD at Air Studios, Lyndhurst Hall, London, in February, 2011, the sound is as realistic as one could imagine. In the two-channel stereo mode of this hybrid stereo/multichannel disc (which I listened to on a Sony SACD player), the voices sound well defined and well separated, with a wide front-channel spread and ample depth. The viol accompaniment is subtle and well integrated into the sonic field. To make matters even better, the acoustic displays a touch of inherent hall resonance for a warm and natural effect, an effect the multichannel layer would undoubtedly enhance.

To complete the package, we get a well-explained, well-illustrated booklet insert, which also contains the full text and translations of the songs in English, French, and German. The package itself is a Digipak, which I don't care for all that much, but I can forgive this one drawback when the Harmonia Mundi folks have done everything else so well.