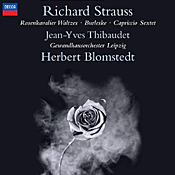 I'm not sure we needed another recording of Richard Strauss's Rosenkavalier Waltzes, but here we get two of them. Strauss was not too keen on arranging a suite of waltzes from the opera himself, yet he was never too happy with the suite arranged by Otto Singer and others, either. In 1944, with apparently nothing else to do, he finally got around to putting together a sequence of waltzes from Acts 1 and 2, along with some new connecting material to make the whole thing hang together better.

Herbert Blomstedt conducts the Gewandhaus Orchestra Leipzig in both this suite and the anonymous one of tunes from Act 3, along with two couplings, the Burleske for Piano and Orchestra, with the eminent Jean-Yves Tibaudet as soloist, and the Sextet that opens the opera Capriccio. Blomstedt's knowledge and direction of Strauss are beyond reproach, and whether we needed another recording of the music, this one is as good as any. 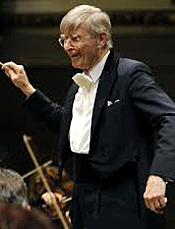 The waltzes owe a lot to those other Strausses, the waltz family Strausses, but, of course, they are pure Richard Strauss, too, with sweet, felicitous touches of Til Eulenspiegel and Ein Heldenleben thrown in along the way. The Sextet is wonderfully serene and beautifully performed. And the Burleske is surprisingly Romantic, or perhaps not so surprising considering Strauss originally wrote it when he was only twenty-one years old (and revised it a few years later).

The sound is typical of Decca in that it is very robust, strong in the bass, and a touch hard in the upper frequencies. Oddly, while Decca recorded the Burleske more recently, in 2004, they recorded the other pieces almost a decade earlier in 1996. I wonder how much other good stuff these record companies have lying around unopened in their vaults?