Pleyel: Symphonies in B flat and G (CD review) 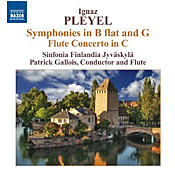 OK, so Ignaz Joseph Pleyel is not exactly a household name. However, if you are an enthusiastic classical-music fan, you may have heard of him. He was a prominent figure in his time (1757-1831), a French composer and piano builder born in Austria, a pupil of Joseph Haydn, and the prolific writer of some fifty classical symphonies and a ton of other stuff before retiring from music into the business world. How prominent was he? People of his day thought of him as more important than Mozart and a successor to Haydn. Today, if it weren't for a few record labels like Naxos, Chandos, CPO, and Denon, we probably wouldn't know who he was. Such are the vicissitudes of life.

Next, you may not be quite aware of who Patrick Gallois is, either, so let me remind you. He's the conductor on the disc and the flute player on the final piece. He was the principal flutist for the Orchestre National de France from 1977-1984; he's been a celebrated soloist for years; he's been the Music Director of the Sinfonia Finlandia Jyvaskyla since 2003; he's been under contract to both DG and Naxos as a soloist and a conductor for quite some time; and he's got a discography that numbers over seventy-five recordings. Yes, of course, you know him.

Now that we're a little clearer about the participants, let's take a look at the music. The album begins with two of Pleyel's multitudinous works, the Symphony in B flat major (Benton 125) and the Symphony in G major (Benton 130), which Pleyel wrote somewhere in 1780's. In the same way that Carl Friedrich Abel's symphonies resemble early Mozart, so do Pleyel's symphonies sound like early Haydn. They are elegant, charming, bouncy, cheerful, and endlessly entertaining. The music is light and airy, with delightfully lilting melodies.

Using an orchestra of modest proportions (a booklet photo shows about thirty-five or so players and a note says there are thirty-eight involved), Gallois is able to produce buoyant rhythms and clear, clean textures appropriate to the tunes. The slow movements are particularly lithe, radiating a special glow that is hard to resist. 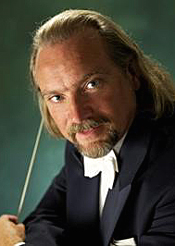 As appealing as the symphonies are, the Flute Concerto in C major (Benton 106) is the highlight of the program. Even though this concerto comes from late in Pleyel's musical career, one can understand after listening to it why the man was so enormously popular in his era. Hedging his bets, Pleyel issued it in simultaneous versions for flute, violin, and cello. He had it all cornered. Anyway, Gallois has it all cornered as well, conducting with a liquid, flowing hand and playing with grace and sensitivity.

Smooth and lifelike, the sound is among Naxos's best. They recorded the album at Suolahti Hall, Jyvaskyla, Finland, in January of 2010, obtaining excellent stereo separation and imaging left-to-right and front-to-back. We also hear a pleasant ambient bloom, but not so much resonance that it veils important detail. The ensemble, relatively small, not much more than a chamber orchestra, reflects those of the Classical Period, and the Naxos sound provides ample transparency for them. Dynamics are not especially strong, yet they do not need to be. This is fairly easygoing music, and as such it doesn't require much crash, boom, bang. The engineers miked it to reveal a suitable distance, too, giving the listener the feeling of being in an actual concert hall, the whole presentation doing just about everything right.

On a side note, Naxos have filled out the disc with a generous seventy-nine minutes of music. So, yes, you get your money's worth here, a proposition all the more attractive when you consider the relatively low cost of the disc.

Email ThisBlogThis!Share to TwitterShare to FacebookShare to Pinterest
Labels: Pleyel