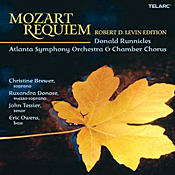 It seems as though every time a new Mozart Requiem appears, it's based on a different edition, each revision claiming to be more "authentic" than the last. I suppose it sells records.

In this 2005 Telarc release from Donald Runnicles and the Atlanta Symphony, the performers play the work from the Robert D. Levin edition of 1993. As you know, when Mozart died he left over half of the Requiem unfinished, and his friend and former pupil, Franz Xavier Sussmayr, completed the work from the middle of the "Lacrimosa" to the end (perhaps with help). Ever since then, audiences have complained that the second half of the piece didn't exactly sound like Mozart. Well, surprise; it isn't. I suspect that for the purist, the easy answer to the dilemma is simply to stop at the end the "Lacrimosa" and forget about the rest. (Or stop somewhere in the middle of the "Lacrimosa" to be doubly sure that your Mozart is pure.)

In any case, Mr. Levin says he tried to improve upon Sussmayr's additions rather than replace them, writing, "The traditional version has been retained insofar as it agrees with the idiomatic Mozartian practice." He corrected a few sections and pared back others in order to hear the vocal parts better, and so forth. The results of all these editions never seem to sound much different to me, but I'm clearly a barbarian. Runnicles adopts a steady tempo throughout, with very few dramatic dynamic contrasts, making for an enjoyably smooth Requiem, one that both avid Mozart fans and casual listeners alike should find readily accessible. Still, there is a "however." It was not long before that Nikolaus Harnoncourt also recorded the Requiem (Deutsche Harmonia Mundi), his interpretation sounding to my ears more vibrant and spirited, more emblazoned with fiery color, and done on period instruments. What's more, I think the DHM sonics were cleaner and more transparent, the massed voices, especially, sounding clearer than Telarc's.

So it's not as though this new Telarc has the field all to itself. Indeed, with so many competing Requiems available, it's hard to make a single recommendation. Certainly, Runnicles is in the running.