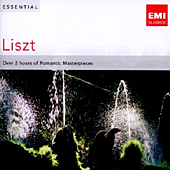 The folks at EMI continue their series of compilations with this two-disc set of works by Hungarian pianist and composer Franz Liszt (1811-1886). However, you won't find any of Liszt's longer works here, no complete piano concertos or sonatas or Faust or Dante symphonies. Instead, what we get are smaller pieces, tone poems and rhapsodies, and movements from lengthier works. The set's value is twofold: For the novice collector of classical music it provides an introduction to the composer, a place to start; for the experienced collector it provides a way to sample quite a few recordings one might not have heard before and which one might want to explore further. Either way we get high-class performances from big-name artists in typically good EMI sound.

Oddly, EMI say on the cover that the set contains "over 2 hours of Romantic Masterpieces." Actually, there are over two-and-a-half hours of music on the two discs. You'd think they'd want to brag about that a little more.

I won't attempt to cover everything on the two discs since there are twenty-five separate items involved. Instead, I'll just highlight a few of the best or most-important things the discs contain. First up on disc one we get the Hungarian Rhapsody No. 2 in C minor, arranged for orchestra by Karl Muller-Berghaus and performed by Willi Boskovsky and the London Philharmonic Orchestra, recorded in 1978. Just in case the listener is somehow unfamiliar with the music, EMI provide a hint in the form of a parenthesis with the name of a famous movie that featured the music, in this case Who Framed Roger Rabbit? Remember the dueling pianos? People may forever remember Boskovsky for his recordings of Johann Strauss, but he was also one of the best conductors in the orchestral arrangements of the Rhapsodies, so I found his interpretation most welcome, an exhilarating way to open the show in excellent, dynamic sound.

Speaking of piano solos, as Liszt was, after all, a pianist and wrote much of his material for himself as soloist. Accordingly, we find here La campanella with Cecile Ousset, piano, from 1985. It's lovely, if a tad distant in sound. Un sospiro with Francois-Rene Duchable, from 1996, is longing and wistful. The Transcendental Etudes No. 5, Feux follets, with Dimitris Sgouros (1985) and No. 4, Mazeppa, with Vladimir Ovchinikov (1989) also sound good; as do about ten minutes from the Piano Sonata in B minor with Cecile Ousset again (1985).

Needless to say, there are a few shorter orchestral works here as well, like Les Preludes played by Riccardo Muti and the Philadelphia Orchestra, from 1983, that closes disc one. Oddly, with movie names everywhere in the booklet, EMI make no mention of Les Preludes featuring prominently in the old Flash Gordon serials with Buster Crabbe. Anyway, Muti whips up a storm, although the sound is a bit softer than I'd like.

Disc two begins with the opening movement of the Piano Concerto No. 1 and later we get the closing movements of the Piano Concerto No. 2 with Michel Beroff, piano, and Kurt Masur and the Gewandhaus Orchestra from 1980. They are very big and very grand, with a clean, clear, if slightly up-close piano sound and excellent accompaniment from the one of the oldest ensembles in the world. The same team also do the Mephisto Waltz No. 1, recorded in 1981, and the Totentanz or "Dance Macabre," recorded in 1980. The latter is among the best interpretations you'll find anywhere, the Dies Irae variations downright scary.

In all, the performances do justice to the music, although in many cases I would have personal favorites beyond the ones included here. You can reference my "Basic Classical Collection on Compact Disc" for further recommendations. Still, you could not really ask for better versions than these in interpretation or sound.