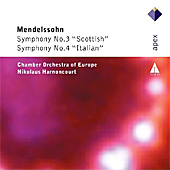 For a lot of classical music fans, conductor Nikolaus Harnoncourt is not exactly the first name that would spring to mind when thinking of the music of Felix Mendelssohn (1809-47). Harnoncourt may seem more entrenched in the Baroque and Classical periods and a little too straightlaced tackling the lighter, Romantic charms of Mendelssohn. Not so, as this 2011 Warner Classics reissue of a 1991 Teldec recording demonstrates. Leading the excellent Chamber Orchestra of Europe, Harnoncourt turns in spruce and tidy performances of Mendelssohn's two most-popular symphonies.

The disc begins with the Symphony No. 3 in A minor, Op. 56, "Scottish," 1842, the last of five symphonies Mendelssohn wrote, despite the numbering. He called it his "Scottish" symphony because he started writing it over a dozen years earlier after a visit to Scotland. It doesn't actually sound all that Scottish, though; it's more like a brief, musical impression the composer got of the country, an impression he expanded over the years.

Anyway, Harnoncourt takes his time in the first movement, creating tension without hurrying the music. Counting the repeat, this is one of the longer renditions of the opening segment I've heard.  Nevertheless, it's among of the more delightful. Then, in the Scherzo, the conductor zips along quicker than I can remember anyone doing and offers up a zesty bit of highland festivity. In the Adagio, unfortunately, Harnoncourt misses some of the work's radiant beauty, never quite moving one the way several other conductors do. He seems a little too fussy and precise. Happily, he makes up for it with a brilliantly intense finale, where he shows a good deal of passion for the music, closing the show in high style.

Now, here's the "however." While Harnoncourt's performance is genial and efficient, it does not displace my own personal favorites:  Peter Maag (Decca), Claudio Abbado (Decca or DG), Bernard Haitink (Philips), Riccardo Muti (EMI), Andre Previn (EMI), and Herbert Blomstedt (Decca).

It was in 1831, when Mendelssohn was just twenty-one, that he visited Italy and became so enthusiastic about it he began to compose his Symphony No. 4 in A major, Op. 90, "Italian," which he completed several years later. However, he never did get around to publishing his revised version of the score, which didn't see a performance until two years after his death. Yet it comes down to us as one of his most endearing and enduring works.

In the Fourth Symphony Maestro Harnoncourt goes full-bore in the beginning, generating a good deal of excitement, yet with a lovely lilt. The rest of the reading seems a bit more mundane by comparison, yet it remains impressive, especially the Presto conclusion. Still, there's always a "however," and here it's that I don't consider it superior in any way to Otto Klemperer's sunnier, more agreeable realization (EMI) or Abbado's (Decca or DG), Blomstedt's (Decca), Previn's (EMI), Charles Munch's (RCA), George Szell's (Sony), or Giuseppe Sinopoli's (DG).

Teldec recorded the performances in October of 1991 at the eighteenth-century opera house Teatro Comunale in Ferrara, Italy. The recording comes up sounding smooth and well balanced, if not too spectacular in a given department. That is, everything is neatly in its place without being outstanding in any one area. The midrange is fluid but not particularly transparent. The bass is adequate, if a touch thin and not really too deep. The highs are fine but not too sparkling or extended. The dynamic range and transient attack are OK but won't set an audiophile's heart to racing. The overall sonic impression one comes away with is that of pleasant competence at the expense of much daring.