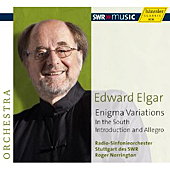 A lot of Americans will probably forever know English composer Edward Elgar (1857-1934) as that guy who wrote the graduation march. He definitely got the most from his Pomp and Circumstance March No. 1, but it may have been at the expense of people neglecting his main body of work, like his other Pomp and Circumstance marches, his two symphonies, his violin concerto, his cello concerto, and the three pieces of music on the present disc. Certainly, British conductor Sir Roger Norrington isn't about to let people forget him, though.

The concert overture In the South (Allasio), Op. 50, which Elgar premiered in 1904, makes a suitable opening number with its big, bold statements along the lines of Richard Strauss's Don Juan from a decade or so earlier. Nevertheless, Elgar claimed the music represented a holiday he spent in Italy. That may be so, but it sounds more heroic than it does balmy, sunny, or Italian. At any rate, Norrington and his Stuttgart Radio Symphony Orchestra play up the Strauss angle pretty thoroughly, which in this case is not a bad thing to do.

Next, we get Elgar's Introduction and Allegro for String Quartet and String Orchestra, Op. 47, premiered in 1905. The intriguing thing here is the interaction between the quartet and the orchestra, with Norrington taking his time with it and letting it play out in a leisurely yet cogent manner. It is interesting that Norrington made a splash some years ago with his London Classical Players, a period-instruments group that would often move along at quite zippy speeds. However, in the Introduction and Allegro, as I say, Norrington seems entirely relaxed and easygoing. It's an enjoyable approach.

Of the works on the disc, the Enigma Variations are no doubt the most well known. Premiered in 1899, it was Elgar's first really big success. These fourteen Variations on an Original Theme, Op. 36, began life as an improvisation that Elgar continued to toy with, bringing in all sorts of clever, hidden, and not-so-hidden meanings. Norrington seems less interested in the esoteric significance of the movements as he does simply in making each one of them as charming as possible. Here, he succeeds well, making this Enigma set one of the most comfortable, picturesque, colorful, and entertaining you'll find. Perhaps they're not in the same exalted league as the classic accounts by Sir Adrian Boult (EMI) or Sir John Barbirolli (EMI), but at least they come close.

Hanssler Classics recorded two of the works in live performances in Liederhalle Stuttgart, 2007 and 2010, and the other one (Introduction and Allegro) in Funkstudio des SWR in 2010. There is no question the live performances sound live: They appear moderately miked, slightly veiled, and very spacious. They also have an unfortunate eruption of applause at the end of each of them, disturbing one's final appreciation. Those concerns aside, the sound is fine, with plenty of dynamic punch in addition to the ambient bloom of the acoustic. Although ultimate transparency suffers, to be sure, in favor of a more natural sonic environment, the compromise seems reasonable. Of the three recordings, the Enigma Variations come up best, with the cleanest textures and some especially realistic timpani whacks.