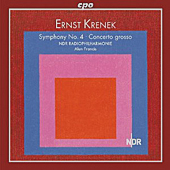 Ernst Krenek (1900-1991) was an Austrian-born American composer who may have been more famous for his short-lived marriage to the daughter of Gustav Mahler than for anything he ever wrote. He earned a living largely by teaching, lecturing, and completing the unfinished material of other composers, despite his producing over 240 of his own works in his lifetime. Throughout his career, he adopted a variety of compositional forms, from late-Romantic to atonality, from neoclassicism to experimental jazz, and from modal counterpoint to twelve-tone writing, serial techniques, and electronic music, making him truly a man for all seasons. However, I wonder if he had settled down to one particular style, if his music would have been more popular today? Who knows.

The new CPO album under review begins with a world-première recording of Krenek's Symphony No. 4, Op. 113, from 1949. It's a three-movement symphony that starts out with a tranquil Andante and goes in all directions from there. The booklet note tells us that Krenek composed the piece in "free atonality with some tone elements in design." The music appears fairly complex, with alternating themes and rhythms, yet it's reasonably accessible, too, at least under Maestro Alun Francis and the NDR Radiophilharmonie (North German Radio Broadcasting Philharmonic), who seem to know their way around the score.

Perhaps it's the constant variations of tone and mood that keep one involved. Things get a little hectic toward the end of the opening movement, leading to a quiet Adagio and then on to a moderately intense Allegro pesante (fast and lively, but with weight). This concluding segment clearly shows the influence of Stravinsky on Krenek's music making, and for a moment you'd think the composer had strayed off into The Rite of Spring. We hear primarily percussion and strings from that point on, fascinating to be sure, but not exactly earthshaking. Still, it surprises me that no one has recorded the work before now; it has enough going on in it to qualify for multiple interpretations.

The coupling is Krenek's Concerto Grosso No. 2, Op. 25, a five-movement piece completed in 1924.  The term "concerto grosso" ("big concerto") refers to a musical form that originated in the Baroque period in which the full orchestra and a small group of soloists play contrasting sections. Needless to say, Krenek embroiders the format in his own unique way, combining elements of the Baroque, neoclassicism, and German expressionism, supplemented by healthy doses of Stravinsky again as well as Bach. There is an especially engaging Allegro at the center of it all containing slightly melancholic dance passages that Francis brings out with admirable color and panache. Although I can't say I was quite as taken by the dark fourth-movement Andante as I was with the minuets, things close out with a buoyant Allegro encompassing some abrupt changes in temper.

CPO recorded the album in 2006 at the Grosser Sendesaal des NDR Landesfunkhaus Niedersachen with pleasing results. A wide dynamic range comes into play, with strong impact from the timpani and bass. While the strings get a tad edgy on a few occasions, the sonics probably come pretty close to what the NDR Radiophilharmonie actually sounds like and what Krenek had in mind. There is also a welcome sense of orchestral depth and a natural acoustic bloom to provide a realistic setting for the music. In all, it's a performance and sound worth investigating.

Email ThisBlogThis!Share to TwitterShare to FacebookShare to Pinterest
Labels: Krenek