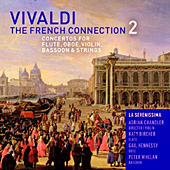 For those listeners who have convinced themselves that Antonio Vivaldi (1678-1741) rewrote the same concerto 800 times, the period-instruments group La Serenissima, lead by their founder Adrian Chandler, make a convincing argument to the contrary. Following up their Gramophone award-winning album The French Connection, La Serenissima's second collection of Vivaldi concertos in the French style is an eye-opening, ear-flattering delight from start to finish.

So, what exactly is the "French style"? That's a bit uncertain, it seems. What is clear, though, is that in Vivaldi's time the influence of Italian music in France was strong, and as a result Italian composers like Vivaldi adapted some of their music to appease French tastes. Likewise, French music adopted some of the Italian style, so it's hard to tell which country most affected the other. In any case, according to Maestro Chandler you will hear variously in the nine concertos presented on the disc examples of "French overture-like flourishes," Bourrées (French dances), an invitation to "more galant execution of appoggiaturas and trills," further French dance-like characteristics, and an emulation of "French sonority" in "quieter, sweeter sounds."

The two world-première recordings are of the Concerto "Il Gran Mogol" for flute, strings and continuo in D, RV 431a, which researchers only recently found in the National Archives of Scotland; and the Concerto for violin, strings and continuo, RV 365, for which Chandler uses the earlier of two finales and slightly modifies the slow movement according to the composer's initial intentions. This second of the world premières is an especially lovely work all the way around.

Perhaps the most unusual piece on the program, however, is the Concerto "Intitolato La Notte" for flute, two violins, bassoon and continuo in G, RV 104. Vivaldi wrote it in five movements, using both flute and bassoon in the mixture and beginning with a Largo rather than a traditional Allegro. This piece also contains some of the most-playful and most-solemn movements on the disc, making it a piece of music I'm sure Disney might have enjoyed animating for another Fantasia.

Anyway, as I say, it's hard to choose favorite pieces because they're all so well played. Chandler and La Serenissima play with such finesse, such precision, and yet such rollicking good fun, they make every work on the disc sparkle and come alive. Nor do they need to do it by galloping full speed ahead as some other period-instruments groups do in their pursuit of "authentic" period practices. La Serenissima's performances always sound comfortable; never cozy or stuffy or sentimental, but just right, just the way you might hum or whistle the pieces (if that was your idea of a good time). They play with animation, resilience, good sense, and passion. It's a winning combination.

Avie recorded the music at the Hospital of St. Cross, Winchester, England, in February, 2011, obtaining their usual excellent results. The sound is at once warm and smooth yet firm and detailed.  Unlike some period-instruments recordings that can sound harsh, strident, or excessively bright, these recordings sound tight and natural, with a pleasant acoustic glow around the instruments making them appear all the more realistic. Taken together--performances and sound--the album makes another enjoyable treat from La Serenissima, a name, incidentally, that the ensemble borrowed from "La Serenissima Repubblica di Venezia" (or "The Most Serene Republic of Venice"). Certainly, they play serenely, with unruffled good cheer.