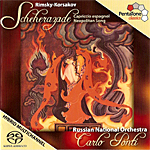 When Nicolai Rimsky-Korsakov (1844-1908) wrote his symphonic suite Scheherazade, Op. 35, in 1888, he based it on stories from the Arabian Nights, saying "All I desired was that the hearer, if he liked my piece as symphonic music, should carry away the impression that it is beyond a doubt an Oriental narrative of some numerous and varied fairy-tale wonders and not merely four pieces played one after the other and composed on the basis of themes common to all the four movements." The work would go on to become probably the most-popular music the man ever wrote and one of the most widely played and widely loved pieces in the classical repertoire.

As one might expect of so famous a work, competition among stereo recordings is fierce. My own favorites are older, well-established ones: Fritz Reiner and the Chicago Symphony (RCA) for excitement; Bernard Haitink and the London Philharmonic (Philips) for poetry; Sir Thomas Beecham and the Royal Philharmonic (EMI) for color; Kiril Kondrashin and the Concertgebouw Orchestra (Philips) for power; and Sir Charles Mackerras and the London Symphony (Telarc) for vividness. With such formidable rivals, Maestro Carlo Ponti's new PentaTone recording with the Russian National Orchestra doesn't quite measure up, unless one simply has to have the music in multichannel sound.

Thanks to Tatiana Porsheneva's violin playing, this Scheherazade does sound properly sensuous, that much is certain--luxuriant, voluptuous, even sensual. It's Ponti's direction that seems a bit foursquare. It doesn't appear as though he wants to take too many chances. Although the performance is smooth and agreeable, it lacks much of the individuality of competing interpretations. This one is more lyrical than most, though, with "The Tale of Prince Kalendar" sounding resplendent and dance-like and "The Young Prince and the Young Princess" coming off even better. Yet that big finale, "The Festival at Bagdad; the Sea; The Shipwreck," despite some big orchestral thumps, seems too casual, never drumming up much fervor or passion.

Likewise, the Capriccio espagnol, Op. 34 (1887) strikes me as being a tad underpowered, at least for my taste. Under Ponti's direction, it contains moments of great beauty, to be sure, but it never quite reveals the bravura or vivacity one expects until the very end, the fifth and final section, where the "Fandango asturiano" packs a solid wallop. But why save it all for the last?

The program ends with Rimsky-Korsakov's rather incongruous Neapolitan Song, Op. 63 (1907), familiar to most of us as Italian composer Luigi Denza's music for "Finiculi, Finicula," written a quarter of a century earlier. Here, Ponti shows the kind of spirit somewhat lacking in the earlier pieces, the Neapolitan Song full of verve and high spirits.

I listened to this hybrid stereo/multichannel disc in the two-channel mode on a Sony SACD player, and found the sonics quite good. Sometimes on other SACD's, it sounds as if the audio engineers had folded the rear-channel sound into the front channels, resulting in a degree of lower-midrange thickness, but not here. Recorded at DZZ Studio 5 Moscow, in June 2010, the sound is fairly clear, with a pleasant ambient bloom around the ensemble. Dynamics could be a tad stronger, impact greater, and bass deeper, even if these qualities do come to the fore on occasion. Although there are a couple of hefty bass whacks to liven things up, it isn't really enough for this type of music. The PentaTone sound is simply genial, listenable, rather than audiophile material.

John J. Puccio, Founder and Contributor
Understand, I'm just an everyday guy reacting to something I love. And I've been doing it for a very long time, my appreciation for classical music starting with the musical excerpts on the Big Jon and Sparkie radio show in the early Fifties and the purchase of my first recording, The 101 Strings Play the Classics, around 1956. In the late Sixties I began teaching high school English and Film Studies as well as becoming interested in hi-fi, my audio ambitions graduating me from a pair of AR-3 speakers to the Fulton J's recommended by The Stereophile's J. Gordon Holt. In the early Seventies, I began writing for a number of audio magazines, including Audio Excellence, Audio Forum, The Boston Audio Society Speaker, The American Record Guide, and from 1976 until 2008, The $ensible Sound, for which I served as Classical Music Editor.
Today, I'm retired from teaching and use a pair of bi-amped VMPS RM40s loudspeakers for my listening. In addition to writing the Classical Candor blog, I served as the Movie Review Editor for the Web site Movie Metropolis (formerly DVDTown) from 1997-2013. Music and movies. Life couldn't be better.

Karl W. Nehring, Editor and Contributor
For more than 20 years I was the editor of The $ensible Sound magazine and a regular contributor to both its equipment and recordings review pages. I would not presume to present myself as some sort of expert on music, but I have a deep love for and appreciation of many types of music, "classical" especially, and have listened to thousands of recordings over the years, many of which still line the walls of my listening room (and occasionally spill onto the furniture and floor, much to the chagrin of my long-suffering wife). I have always taken the approach as a reviewer that what I am trying to do is simply to point out to readers that I have come across a recording that I have found of interest, a recording that I think they might appreciate my having pointed out to them. I suppose that sounds a bit simple-minded, but I know I appreciate reading reviews by others that do the same for me — point out recordings that they think I might enjoy.
For readers who might be wondering about what kind of system I am using to do my listening, I should probably point out that I do a LOT of music listening and employ a variety of means to do so in a variety of environments, as I would imagine many music lovers also do. Starting at the more grandiose end of the scale, the system in which I do my most serious listening comprises Marantz CD 6007 and Onkyo CD 7030 CD players, NAD C 658 streaming preamp/DAC, Legacy Audio PowerBloc2 amplifier, and a pair of Legacy Audio Focus SE loudspeakers. I also do a lot of listening while driving in my 2016 Acura RDX with its nice-sounding ELS Studio sound system through which I play CDs (the ones I especially like I rip to the Acura’s hard drive so that I can listen to them whenever I want) or stream music through the system using my cell phone. For more casual listening at home when I am not in my listening room, I often stream music through the phone into a Vizio soundbar system that has remarkably nice sound for such a diminutive physical presence. And finally, at the least grandiose end of the scale, I have an Ultimate Ears Wonderboom Bluetooth speaker for those occasions where I am somewhere by myself without a sound system but in desperate need of a musical fix. I just can’t imagine life without music and I am humbly grateful for the technology that enables us to enjoy it in so many wonderful ways.

William (Bill) Heck, Webmaster and Contributor
Among my early childhood memories are those of listening to my mother playing records (some even 78 rpm ones!) of both classical music and jazz tunes. I suppose that her love of music was transmitted genetically, and my interest was sustained by years of playing in rock bands – until I realized that this was no way to make a living. The interest in classical music was rekindled in grad school when the university FM station serving as background music for studying happened to play the Brahms. As the work came to an end, it struck me forcibly that this was the most beautiful thing I had ever heard, and from that point on, I never looked back. This revelation was to the detriment of my studies, as I subsequently spent way too much time simply listening, but music has remained a significant part of my life. These days, although I still can tell a trumpet from a bassoon and a quarter note from a treble clef, I have to admit that I remain a nonexpert. But I do love music in general and classical music in particular, and I enjoy sharing both information and opinions about it.
The audiophile bug bit about the same time that I returned to classical music. I’ve gone through plenty of equipment, brands from Audio Research to Yamaha, and the best of it has opened new audio insights. Along the way, I reviewed components, and occasionally recordings, for The $ensible Sound magazine. Most recently I’ve moved to my “ultimate system” consisting of a BlueSound Node streamer, an ancient Toshiba multi-format disk player serving as a CD transport, Legacy Wavelet DAC/preamp/crossover, Tandberg 2016A and Legacy PowerBloc2 amps, and Legacy Signature SE speakers (biamped), all connected with decently made, no-frills cables. With the arrival of CD and higher resolution streaming, that is now the source for most of my listening.

It is the goal of Classical Candor to promote the enjoyment of classical music. Other forms of music come and go--minuets, waltzes, ragtime, blues, jazz, bebop, country-western, rock-'n'-roll, heavy metal, rap, and the rest--but classical music has been around for hundreds of years and will continue to be around for hundreds more. It's no accident that every major city in the world has one or more symphony orchestras.
When I was young, I heard it said that only intellectuals could appreciate classical music, that it required dedicated concentration to appreciate. Nonsense. I'm no intellectual, and I've always loved classical music. Anyone who's ever seen and enjoyed Disney's Fantasia or a Looney Tunes cartoon playing Rossini's William Tell Overture or Liszt's Hungarian Rhapsody No. 2 can attest to the power and joy of classical music, and that's just about everybody.
So, if Classical Candor can expand one's awareness of classical music and bring more joy to one's life, more power to it. It's done its job. --John J. Puccio
The reader will find Classical Candor's Mission Statement, Staff Profiles, and contact information (classicalcandor@gmail.com) toward the bottom of each page.