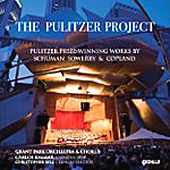 Titled The Pulitzer Project, this 2011 album from Cedille Records features three compositions that won Pulitzer Prizes in the mid Forties, two of them world première recordings. Yes, I know what you're thinking: How is it possible that record companies haven't recorded two Pulitzer Prize-winning pieces of music before now? Well, frankly, as good as they are, they aren't highly accessible, and I can only suppose that most record companies weren't sure they'd sell. Indeed, it may be why Cedille chose to include Copland's Appalachian Spring along with them to ensure the disc's success.

Surprisingly, perhaps, given that the Pulitzer committee has been handing out awards since 1917, they only started giving prizes for music in 1943. The criterion is "for a distinguished musical composition by an American that has had its first performance or recording in the United States during the year." That first year, 1943, they awarded the prize to William Schuman (1910-1992) for his brief, thirteen-minute, two-movement work A Free Song, which begins the program.

Schuman wrote A Free Song for orchestra and chorus, basing it on a poem, "Drum Taps," by American poet Walt Whitman. A press release for the music's original publication announced that "grace and charm are crowded out by the impact of granite-like blocks of dissonant harmony and sharp-edged counterpoint." With publicity like that, it's no wonder no one recorded the music until now.

It's not as bad as it seems, though, and under Maestro Carlos Kalmar's deft direction, some of that sharp edge feels diminished. While it is still not an easy piece of music to live with, it makes a strong, if brief, curtain raiser, acting as a kind of overture to the rest of the program.

The centerpiece of the album is Appalachian Spring by Aaron Copland (1900-1990), a piece that won the Pulitzer in 1945. It's familiar enough for most of you probably to own several different recordings of several different versions of it. It's available in its complete, original chamber version, complete orchestral version, and popular suite, which is what we get here. My own favorite recordings have been those by Michael Tilson Thomas (RCA), Leonard Slatkin (EMI), Leonard Bernstein (DG), Antal Dorati (Decca), and, most of all, by the composer himself (Sony). However, this new recording by Carlos Kalmar fits in nicely with the best of them. Among the adjectives I wrote down as I was listening were graceful, easygoing, gentle, smooth, light, folksy, breezy, charming, amiable, cozy, and neighborly. It's quite the moving interpretation, and, as I say, places it among the best readings available.

The final work on the program is The Canticle of the Sun by Leo Sowerby (1895-1968), the piece winning the prize in 1946. Sowerby based his eleven-movement suite for orchestra and chorus on English writer Matthew Arnold's translation of the St. Francis of Assisi poem. Its orchestral prelude adopts a rather lofty tone, followed by an equally grandiose entry from the chorus. The mood lightens considerably as it goes along, although it tends to alternate august, sweeping sections with soft, serene, flowing ones, and not a few hectic, stormy ones in between. Kalmar probably does what he can with the music, but it may not appeal to every listener despite some lovely passages.

Cedille recorded the music "in concert at the Harris Theater for Music and Dance in Millennium Park, Chicago, June 25 and 26, 2010." I didn't really like the thought of that "in concert" business because even though live performances can sound fine, they often don't sound as good as they might have sounded in the studio or without an audience. In the case of this Cedille recording, it is good, but it is not quite as good as I'd liked.

First, it sounds fairly close up, probably to minimize audience noise. It does its job in this regard quite well. Along with the absence of any annoying applause, the miking picks up little or no distracting audience commotion. Second, it sounds big, widely spread out, and slightly forward. There are times when it also sounds a bit thin and hard compared to Cedille's best work, occasionally favoring the upper midrange. However, a wide dynamic range and some solid impact help to add needed realism to the occasion.