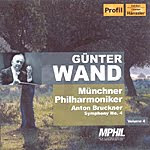 Profil may make me think twice about live recordings. I don't usually care for them; they're too often vague and distant, with a plethora of audience noises in the background, or close-up and uncomfortable. But the several live recordings that the folks at Profil have remastered in the past few years have been of generally excellent sound quality, with only an unfortunate applause at the end to remind one that they are, indeed, live. This recording of Anton Bruckner's Symphony No. 4 "Romantic" is no exception.

Conductor Gunter Wand, something of a specialist in Bruckner and Beethoven, was close to ninety when he recorded this symphony with the Munich Philharmonic in 2001. It would be among his last-ever performances and the next-to-last time he would conduct the "Romantic" Symphony, which he had been playing for close to sixty years. To say he knew the score inside and out by then would be an understatement.

Here's the thing: Although Wand, always the old-school conductor, took his time developing the ideas in the music he played, his age may have also had something to do with the broad, slow tempos he adopts here. Not that they don't work; it's just that the symphony is longer than I've ever heard it.

Yet when listening to it, the music seems just right. It doesn't actually strike one as slow. In fact, one could easily make the case that Wand's scrupulous shaping of the music makes the big, dramatic moments all the more momentous by their juxtaposition with a steady, careful buildup. Certainly, this is true of the first and last movements, with their alternating grand passions and outbursts. The meditative Andante works well at a leisurely pace, too, and the "Hunting" Scherzo has just the right zip to it.

Originally recorded for radio broadcast, the performance sounds more than acceptable in its CD transfer. There is ample bloom in the lower midrange, a pleasantly realistic sheen to the strings, and a taut definition in the transients. Moreover, there is a good deal of overall clarity involved that seems to bring this live recording close to the actual concert hall. The disc may not be a number-one choice for the Bruckner Fourth Symphony nor displace Wand's previous couple of studio performances, but it is at least close.