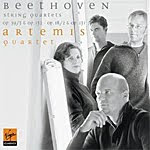 Recorded by EMI-Virgin in Koln, Germany, 1998 and 2002, these four Beethoven string quartets played by the Artemis String Quartet receive what is, I believe, their first release in America. At least, if Virgin issued them over here earlier, the discs escaped me. The interesting thing about this particular collection is that it shows us clearly the contrasts among Beethoven's chamber works, which in itself makes the disc unusual.

Beethoven's early chamber pieces were pretty conventional by the standards of his later work, and here we get both early and late string quartets. Things begin with the String Quartet No 9 in C major, Op. 59, No. 3, the third of three quartets the composer wrote in 1804-06 for Count Andrey Kirilovich Rasumovsky, a music lover with the means to hire his own house ensemble, in which he sometimes himself played. By this time Beethoven's chamber works were becoming quite a bit more mature and complex than those of his contemporaries, and they were also becoming ever more perturbing for his audiences. Many critics of the day, baffled by what they heard, simply dismissed them. No. 9, for instance, is all about contrasts, which Beethoven's listeners must have found unfathomable. After an opening movement of tonal and stylistic disparities, the second movement flows with a wonderfully fluid pizzicato rhythm, followed not by a traditional Scherzo but by a Minuet and then a highly charged finale, which the Artemis Quartet might have played with even more zest.

Next up on disc one is the String Quartet No. 15 in A minor, Op. 132. It comes much later (1824-25) than the preceding piece, and it's done up in five movements rather than the usual four. Beethoven continued to innovate, producing a sedate, almost somber opening section with sudden outbursts; a relaxed second movement; an incredibly touching slow movement sounding at first like a solo organ playing a mournful but moving dirge before breaking out into a more plaintive, emotional appeal; then a march (Napoleonic times, after all, making military motifs common); and at last an ardent but otherwise fairly commonplace closing movement.

Disc two begins with the earliest of the works included, the String Quartet No. 2 in G major, Op. 18, No. 2, a part of Beethoven's first-ever string quartet cycle in 1798. This is a light, blithe, fluent, wholly delightful piece, more in line with the kind of chamber music folks of the time commonly heard. True, an odd outburst of activity erupts in the middle of the slow movement, but this is about the only unusual element in the structure. There is a sly, witty Scherzo, and finally a concluding Allegro of charm and grace. Again, the Artemis group play with such polish they don't alway open up the joy and excitement they could, but there is no denying their finesse.

Finally, we hear the String Quartet No. 14 in C sharp minor, Op. 131, a complete change of pace from the little Quartet No. 2 that goes before it on the disc. Beethoven wrote No. 14 in seven movements this time; moreover, they are seven movements that sort of run into one another. Compared to the cheerfulness of No. 2, this one is more solemn, a note of melancholy tinging even the faster sections.

The Artemis Quartet (Natalia Prischepenko, violin; Heime Muller, violin; Volker Jacobson, viola; and Eckart Rung, cello) play elegantly, precisely, but without some of the passion one hears from other chamber groups. Perhaps they are intent on presenting the music as objectively as possible, I don't know; it's a commendable virtue that, unfortunately, doesn't always pay off in the greatest involvement for the listener. Still, if it's the music one considers foremost, the Artemis players pay the right dividends.

My only quibble is actually with Virgin Records for their arrangement of the quartets on the two discs. I would have preferred seeing them presented in chronological order to be able to hear the composer's progress of thought and style over the years. I suppose one can easily do this by simply playing them in whatever order one chooses, but it would have been easier (provided the music fit on the discs properly) for Virgin to have done it for us.

The sound of the four instruments, incidentally, blends nicely in Virgin's moderately close-up recording, making for a comfortable listening experience. The sonics are warm and smooth, the musicians well spread out across the speakers, with an especially taut cello response. The miking is close enough to produce good detail yet displays enough ambient bloom around the instruments to bring out a lush, plush, relaxing sound.