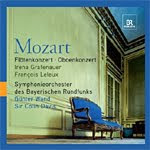 The BR Klassik label continues to provide good value with its Bavarian Radio Symphony Orchestra discs, this one a 2010 release of older recorded material. We get three different Mozart pieces, all written around the same time, 1777-79; two splendid soloists; two star conductors; and one outstanding orchestra.

The program begins with Mozart's Flute Concerto No. 1 in G major, KV 313, written in 1778. The Concerto itself is the epitome of charm, grace, and delight, of course. The soloist, Irena Grafenauer, and conductor, Gunter Wand, are the epitomes of refinement and eloquence, so they work hand in hand with the music, producing a radiant performance. Over the years, a few critics have continued to believe that Mozart disliked the flute and resented having to compose music for it. If so, it certainly doesn't show in his one-and-only concerto for the instrument, especially as felicitously as Grafenauer and Wand play it, the flute lightly dancing throughout. This is old-school Mozart, to be sure, but gracious and engaging in the extreme.

Mozart wrote his Oboe Concerto in C major, KV 314, in 1777, a transcription of which he tried to pass off a year later under the guise of a new flute concerto, and you will still find it sometimes listed as such. In any case, the Oboe and Flute Concertos share much in common with one another, both light and airy, with lovely, songlike, cantabile-based mid sections and spirited conclusions. Sir Colin Davis is a bit more lively in his direction than Gunter Wand, and the listener will find considerable bounce in his tempos. Likewise, oboist Francois Leleux's playing seems more virtuosic, more gymnastic, than Ms. Grafenauer's flute playing, though not necessarily more polished or more enjoyable.

The album ends with Mozart's Symphony No. 32, a very brief and unusual single-movement work, about eight-and-a-half minutes long under Sir Colin Davis. Nevertheless, the single Allegro spiritoso contains a traditional slow segment about halfway through, so it is, in fact, like a mini symphony. Davis offers an energetic, scintillating reading that, in any case, never appears unduly rushed.

In terms of sound, we get recordings spanning a twenty-year period. The Flute Concerto derives from a 1981 recording, and it is smooth and natural, slightly close-up, with a good ambient air, if not a lot of sparkle. The Oboe Concerto is the newest of the lot, recorded live in 2001. It sounds more closely miked than the Flute Concerto, somewhat wider in stereo spread and more open.  However, it is not necessarily more realistic, and there is a little less orchestra depth and some occasional audience noise involved. The Symphony No. 32 comes from 1985, also recorded live, and sounding a bit more dynamic than the others, though with perhaps a touch more forwardness in the upper midrange. None of these recordings can lay claim to audiophile status, but they are satisfying in their own ways.