From the Isles to the Courts (CD review) 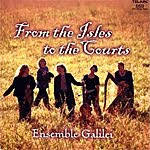 Lovers of all things Irish will enjoy this collection of mostly Celtic music played on traditional Celtic instruments and featuring the usual slow laments, pastoral ballads, and fast-stepping reels. If there appears to be a certain inevitable sameness about the program, it's probably because you're not a student of this particular genre or you've been listening to too much "Riverdance."

The five ladies who make up the Ensemble Galilei play fiddle, pipes, oboe, recorders, pennywhistle, Celtic harp, viola da gamba, percussion, and bowed psaltery. They sprinkle a little Marais and Corelli as well as a number of their own modern compositions into the otherwise conventional Irish and Scottish collection to produce a well-ordered mix of tunes. I liked the names of some of the newer songs as well as I liked the music: "Winter's Falling Light," "The Dance Goes On," "Under the Full Moon," "Home Fires," "The Burning of the Clavie," "Lake Skybelow," and "Aisling." Older melodies include "Scollay's Reel," "King of Fairies," "Old Grey Cat," "Sgt. Early's Dream," The Fair Maid of Barra," and "Dream Angus." I think you get the idea.

What sets this 2000 album apart from the hundred like it is twofold. First, there's the enthusiasm of the players themselves, who display a genuine love for the music they're playing, an uplifting spirit in their performances, and not-a-little fond sentimentality toward their work. Second, Telarc engineer Michael Bishop captures their music-making with an appropriate touch of hall resonance to produce a realistic ambiance that doesn't drown out the details of the instruments. The result is both intimately natural and sonically transparent. I admit that for me a tiny bit of this music goes a long way, but for connoisseurs of the art, the disc is skillful, professional, and pleasantly enjoyable.