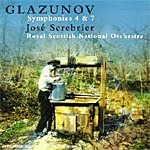 If Alexander Glazunov's name brings to mind little more than the Raymonda and Seasons ballets, don't feel bad; you're probably not alone. He is one of those composers who are known today for only a couple of things, although such composers may have written a huge amount of music. In any case, it's nice to have more of Glazunov's symphonic works on disc, and the Fourth and Seventh Symphonies coupled here are quite appealing, at least the way conductor Jose Serebrier handles them.

Oddly, it is the Symphony No. 7 that has acquired the name "Pastoral," presumably because of a small resemblance in the first movement to Beethoven's "Pastoral"; yet it is Glazunov's Symphony No. 4, premiered in 1894, that would seem to have more in common with Beethoven's Sixth.  The Glazunov Fourth is a totally charming piece, written unconventionally in three movements, the first of which is a somewhat melancholy Andante that slowly speeds up and evolves into an Allegro. It has all the earmarks of a pastoral setting, with an abundance of melody, which conductor Serebrier and the Royal Scottish National Orchestra take joy in communicating. The second movement is a brief, sprightly Scherzo, and the third movement is like unto the first, an Andante developing into an Allegro, only this time more quickly, and culminating in a tremendously exciting climax. Serebrier and his crew seem to enjoy this music, and the album follows up on two previous Glazunov discs they did of Symphony No. 5 and The Seasons and Symphony No. 8 and Raymonda.

The Seventh Symphony is in a more traditional four-movement arrangement. The first movement is moderately fast, with a lovely, sweet, rustic opening. The second, slow, movement is a lengthy and somewhat solemn Andante; the third movement is a Scherzo; and the Finale is a very big, very Russian-sounding affair. Both symphonies are quite melodic, as I've said, although neither has anything in it that is particularly noteworthy or memorable, which is probably why the pieces have been largely forgotten. Nevertheless, the two symphonies are quite delightful, especially the Fourth, and under Serebrier's baton they make for easy, stress-free listening.

The sound the Warner engineers provide for this music is pleasantly realistic without being exceptional in any way. It possesses a smooth, natural tonal balance, a good stereo spread, and ample presence. However, dynamics and deep bass seem constricted, and ultimate transparency is limited at best.

Email ThisBlogThis!Share to TwitterShare to FacebookShare to Pinterest
Labels: Glazunov