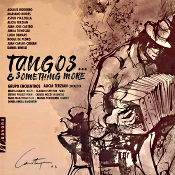 According to Wikipedia, the "tango is a popular partner dance and social dance that originated in the 1880s along the Río de la Plata, the natural border between Argentina and Uruguay. It was born in the impoverished port areas of these countries, where natives mixed with slave and European immigrant populations. The tango is the result of a combination of the German Waltz, Czech Polka, Polish Mazurka, and Bohemian Schottische with the Spanish-Cuban Habanera, African Candombe, and Argentinian Milonga."

That's good to know, as this album, "Tangos... & Something More," offers us tangos new and old, over a dozen of them presented in a variety of styles. Most of the styles, however, are of the "nuevo"  or "new tango" kind, the style popularized in the 1980's by Argentinean composer and player Astor Piazzolla (1921-1992), represented on the program by three selections. The track listings are as follows:

The first selection, Aquiles Ruggero's "Mimi Pinzon," one of the oldest compositions on the program, sounds quite traditional, romantic and lyrical. The next one, Mariano Mores's "Cristol," shows us the contrasts in tango music, with vocals and background sounds and a less obvious tango rhythm. Then it's back to a more customary tango with Astor Piazzolla's highly melodic "Picasso." But possibly the most bizarre "tango" on the album is Jukka Tienssuu's "Tango Lunar," which is hardly recognizable as a tango so much as a collection of random sound effects and vocals linked loosely together in a semi-harmonic manner. Following that is one of the loveliest of tangos, Lucio Demare's "Malena," so there's a little "something more" here for everyone.

And so it goes. The questions being, are these dance numbers really "authentic," and is the playing "authentic," whatever that may mean? Certainly, the music, new or old, is squarely in the tango tradition, so, yes, it is authentic, no matter how odd it may seem. And, certainly, one cannot question the validity of an Argentinean ensemble playing Argentinean music, and they've been doing it for so long I don't see how anyone could question their legitimacy in the subject matter. That they play so effectively and effortlessly is like icing on the cake.

To quibble about so excellent a product seems unfair. Still, there was one thing I didn't care for; namely, Navona's packaging. The disc comes tucked into the sleeve of a cardboard fold-over case, and it is impossible to remove the disc without getting your fingers on the playing surface. I can understand that maybe the cardboard is cheaper than a plastic jewel box and that many companies follow this cardboard practice, but that doesn't make it a better choice for the consumer. End quibble.

Executive producer Bob Lord, engineer Andres Polizzi, and mastering engineer Jorge Da Silva recorded the music at a private studio in Buenos Aires, Argentina in August 2015. It's a small ensemble they're working with, and they handle it expertly. Each instrument, including the voice on several tracks, is realistically captured in a warm, lightly resonant environment. Although they are captured a tad close up, they have a fairly natural feel as well. Nicely done.