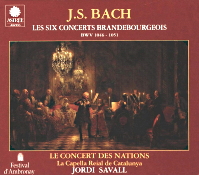 I was already about four years late on these recordings even when I first reviewed them for review about two decades ago. Jordi Savall recorded the Orchestral Suites in 1990 and the Brandenburgs in 1991. I wish I had heard them earlier because I would have had that much more time to enjoy them and, of course, I would have already put them on my recommended recordings list. They are joyous, personal, committed performances that deserve a place on every collector's shelf.

First, let me explain what they aren't. Neither set is among the most elegantly-played readings available. If you are looking for precise, refined playing, look to Sir Neville Marriner and the Academy (Philips and London) in their modern-instruments recordings or Trevor Pinnock and either the Brandenburg Ensemble or the English Concert (Avie or DG Archiv) on period instruments. By comparison, Savall's period group seems sometimes positively ragged. But what Le Concert des Nations lacks in finesse, it makes up for in spirit. I have never heard a group of people playing these works who have sounded so happy in what they were doing. As a result, the pieces themselves come over as joyful affairs and leave the listener in that same delighted mood.

I was even won over by the First Brandenburg Concerto, to which I normally do not respond well. Maybe because of the First Concerto's pastoral nature and larger orchestral forces, I find it oddly out of place with its companions; yet Savall and his group play it with such affection, such obvious love, that I couldn't help for the first time admiring its beauty.

I found Savall's interpretation of the Second Concerto more controversial with its exaggerated dynamics, but even here Savall's emphasis is on originality, an attempt to say something that hasn't already been said a hundred times over. The rest of the Brandenburgs are as lovely or robust, accordingly, as I have heard them, and the four Orchestral Suites (sold as a separate package) are simply above reproach. To find fault with any of these recordings on the basis of interpretation is to be without heart.

However, to be critical of Astree's sound seems entirely fair. While both the Brandenburgs and the Suites share a similar philosophy of sound, given to moderately-distanced miking in a large, naturally-reverberant acoustic, it is the Suites that are decidedly the better sounding. As I said before, the sets were recorded a year apart, and the venue was different in each case. The Orchestral Suites, done earlier in the Grand Hall of the Arsenal at Metz, exhibit smoothness, warmth, and detail in equal measure. The Brandenburgs, done in the Palazzo Giusti del Giardino, are slightly more veiled by hall ambience. It's too bad Astree didn't stick with the first location because neither the detail nor the imaging seem quite as good as in the earlier effort. That said, I still prefer both of these recordings over the leaner, brighter, edgier sound of Pinnock's earlier recording (DG) and Parrott (EMI) or the softer, less clear sound of Goodman (Hyperion) or the Orchestra of the Age of Enlightenment (Virgin). In the Brandenburgs no one has quite matched the sound of the Leonhardt Ensemble (Sony/SEON), Tafelmusik (Tafelmusik's own label or Sony), or Pinnock's later recording (Avie) for clarity and naturalness, but, then, they're not quite as much fun interpretively, either.

Finally, a word about pricing. The distributor of this edition, Harmonia Mundi USA, told me at the time that the Astree label costs them a high price to import. Therefore, the cost to the end buyer was several dollars per disc more than average full-priced discs. The upshot is that you could buy both of Pinnock's recordings in a mid-priced, four-disc set for the cost of these editions of the Savall sets. So don't be shocked if you see Astree's sticker price on the original discs. Nevertheless, there are now several less-expensive editions of Savall's recordings available, so look around. They are bargains.