Tales from the East (CD review) 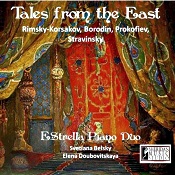 Svetlana Belsky and Elena Doubovitskaya are superb pianists on their own; together as the EStrella
Piano Duo, they are doubly superb.

On this, their debut album, they play music by Russian composers who were inspired by the styles of the Middle East. Here's a rundown on the program:

As these are all familiar orchestral pieces, it would be easy to claim the major attraction of these newly recorded works is the EStrella Duo performing them in arrangements for two pianos. But such is not entirely the case. They are more than a novelty. The pianists are consummate artists who together bring new pleasures and new insights to much traveled roads. These are, for all intents and purposes, new pieces of music, not merely new arrangements.

The first set of selections is from Igor Stravinsky's ballet Petrushka, arranged for two pianos by V. Babin. The "Russian Dance" is a good curtain raiser, a good overture to begin the program that follows. It is zesty and robust, and the two pianists play it with an easy yet virtuosic élan.

At first, I thought I'd try to distinguish the styles of the two performers, but it was a hopeless cause. They both play with such acumen, their agility on the piano so keen, I'm sure they could have at any time reversed pianos and parts, and I would never have known.

Next we get the "Festival in Bagdad" from Nicolai Rimsky-Korsakov's exotic suite Scheherazade, arranged for two pianos by M. Zelenaia and EStrella. Now, this was most interesting. It's such a well-known piece, I was afraid I was going to want to head straightaway to the orchestral version. Instead, I wanted to hear more of the full suite from EStrella. Maybe they'll consider it for their next album. As much as I enjoyed the selection of tunes they offer here, a single, complete work would have perhaps been just as good or better.

After that we find the "Polovetsian Dances" from Alexander Borodin's Prince Igor, arranged for two pianos by V. Babin and E. Doubouvitskaya. From the fiery excitement of Rimsky-Korsakov's "Festival in Bagdad" to the lovely opening melody of the "Polovetsian Dances" makes a starling and satisfying transition in the proceedings, at least until Borodin himself transitions into the livelier sections. Again, the two pianists play with electric precision, all the while capturing the mystery and exoticism of the score. The magical gymnastics of their playing make the EStrella Duo a captivating set of performers.

The program concludes with Sergei Prokofiev's Fantasy-Suite from the ballet Cinderella, arranged for two pianos by A. Gottlieb and E. Doubovitskaya. It's the longest item on the menu, and it's the most modern. It doesn't daunt the two performers in the least, and the duo's sensitive performances should keep most listeners wanting to come back for more.

Producer Susan Merdinger and engineer Victor LeJeune recorded the music at PianoForte Chicago Studios in August 2018. The sound is very clean and very dynamic. The miking is not unreasonably close up, so it resonates with some natural studio bloom. The two instruments are clearly delineated, the separation not too obvious but certainly realistic.