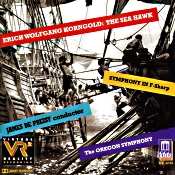 Erich Wolfgang Korngold's score for the 1940 film The Sea Hawk has long been a yardstick for swashbuckling music, and the late Maestro James DePreist's version of it with the Oregon Symphony is as swashbuckling as any.

Of course, there are a number of good performances of this work already available, and you probably have one of them, so the real find is Korngold's Symphony in F-Sharp, of which there are few recordings. Korngold premiered it in 1954, this large-scale symphony a throwback to old-fashioned Romanticism at a time when it was no longer in  vogue. Music critics largely dismissed the work as being out of touch with modern music. Their loss; our gain. Like other Romanticists who continued on despite criticism, Korngold wrote music that was big, bold, inventive, and varied, much like the music of his mentor, Gustav Mahler. The Symphony in F-Sharp sounds a little bit cinematic, to be sure, but that's the source. It conjures up a vast, exotic, Sinbad-type adventure palette, especially in its second and fourth movements. The long, funereal Adagio, however, is more Mahler than anything else. The whole piece merits attention.

Engineer John Eargle made the 1998 recording in Delos's Virtual Reality format, a surround sound process that Delos claimed worked best when played back through Dolby Pro Logic circuitry. In ordinary two-channel stereo, like my main system, it sounds overly reverberant but extremely dynamic, with good imaging and depth of field. Played on my smaller, home-theater system in another room, the back speakers do come to life with pleasant reflections, reinforcing the illusion of a large, resonant concert hall.

The only hesitation I have comes when comparing it to a good recording in ordinary stereo, like Charles Gerhardt's RCA issue of The Sea Hawk, and noticing that without the room reflections the RCA sonics are much more lucid. Nonetheless, the Delos VR process is not so distracting as others I have heard and lends an air of realism to the proceedings often completely lacking in other recordings. Then, too, the surround effects seem less obvious for some reason in the Symphony, perhaps more subtly employed.

In the end, this is a good, innovative issue and deserves a wide audience with its unique music and sound.

Email ThisBlogThis!Share to TwitterShare to FacebookShare to Pinterest
Labels: Korngold