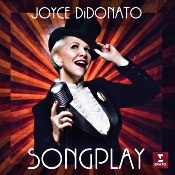 "You got to love to be able to play."  --Louis Armstrong

In the past twenty years or so, the American operatic singer Joyce DiDonato has become one of the world's preeminent sopranos. You would think that by now she'd take the easy route of so many other singers and give us yet another album of popular classical numbers. But, no. In "Songplay" she does something different.

This time out she has chosen to give us an integrated program of classical and modern pop-jazz love tunes, yet with an additional twist. She stylizes the pop-jazz items in somewhat classical fashion and the classical selections in a semi-modern pop-jazz style. The result, with accompaniment by Craig Terry, piano, and an accomplished ensemble of musicians, is a seamless run of musical treats spanning hundreds of years that the performers make appear to sound fresh and new and all of a similar and familiar mode. It's a clever idea, well crafted and immaculately executed.

The songs are so well sung and so well integrated that they're sure to impress both pop-jazz fans as well as more than a few classical admirers. In fact, except for the differences in language, Ms. DiDonato makes the older material sound much like the newer stuff and vice versa. It's a remarkable combination, actually.

Then, too, there is always the phrasing and stylistic touches to consider. Ms. DiDonato, Craig Terry, and the ensemble considered "love and heartfelt music-making" as the platform they had in mind. Certainly, there is "heartfelt" to consider. Delicious.

I have to admit I'm usually immune to pop collections, where the artist just throws together seemingly random song selections and lets the listener pick and choose the ones to hear in the future. I don't have time for that and prefer to hear something more unified, more thematic, longer and more of a whole. I suppose, too, it's why I prefer listening to classical music to most pop material. Yet Ms. DiDonato's album held my attention, maybe because it did appear thematically of one piece.

Favorites? Not really. It's not that kind of album. It isn't a hit here and a miss there. It's more a kind of continuum, a symphony in its way. For instance, the Vivaldi and Conti interludes act sort of as scherzos in the midst of less lively, more-subdued material. It's a unique and remarkable disc.

Oh, and hang around after the last selection. As Yogi Berra said, "It ain't over till it's over."

Producers Alain Lanceron and Steve Barnett and engineer Preston Smith recorded the music at Skywalker Sound, Marin County, California in March 2018. The sound produced is very much in the good studio-pop category. There is plenty of distance and air between instruments, some fine dynamics and transient impact, and excellent overall definition. What suffers is mostly imaging, where the artists as a group don't quite gel as a single ensemble but rather sound like a company of individuals not exactly performing in one place. So, spacing is a bit of an issue. Whatever, as this is primarily a pop album, it works as well as any pop enthusiast would expect.

Email ThisBlogThis!Share to TwitterShare to FacebookShare to Pinterest
Labels: DiDonato