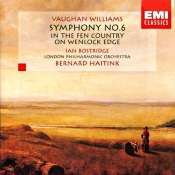 Bernard Haitink's 1999 release of Vaughan Williams's Symphony No. 6 (EMI, now Warner Classics) is a good illustration of why record reviewing can sometimes be frustrating, especially if a reference disc is not handy. On its own, Haitink's interpretation appears competently together, well focused, unified, and, as always, straightforward. As Haitink does in most of his performances, he allows the music to speak for itself, seldom straying from the letter of the score.

Then I put on a favorite old recording of the Sixth, in this case the one by Sir Adrian Boult (also on EMI), recorded exactly thirty years earlier. Why Boult? He premiered the work in 1948, so one supposes he knows a little something about it. Under Boult, the music has more warmth than under Haitink, not just sonically but interpretively, a broader, more loving gait, a sense of real communication between conductor and audience. This is nothing that one can adequately explain in words. It is a feeling one has to experience, and a direct comparison is the easiest way to hear it. Otherwise, one has only a vague notion that "something" is missing somewhere in the Haitink account, as good as it is.

Make no mistake, however. Haitink does offer up a fine performance. It's one that most fans of Vaughan Williams will enjoy. And because of Haitink's usual precision and sharpness of focus, it's a performance that belongs at or near the top of any list of recommendations. The thing is, though, that it's also hard to dismiss Boult, not that most listeners have to make the choice.

Sound has a lot to do with it, too. The newer, digital EMI/Warner Classics is marginally cleaner and clearer than the older, analogue Boult recording, yet at the same time the newer disc appears colder, harder, and less inviting. The older recording is richer and provides more bloom, which may affect one's judgment of the two discs, as it did mine.

How much did the warmer, softer, older recording of Boult's slower-paced performance influence my appreciation of it over the newer one? I'd guess enough. What if the newer reading had had the older sound? Who knows.

In any event, Haitink's companion works on the disc, the tone poem "In the Fen Country" and the song cycle "On Wenlock Edge" (based on poems by A.E. Housman), are more readily up my alley and display a sweetness of spirit and a bent for the color of the Vaughan Williams countryside that I found slightly wanting in the symphony. So, if it's the shorter pieces one is looking for, yes. If it's the symphony, maybe not as much. Stick with either Haitink or Boult, though, and you can't go wrong.