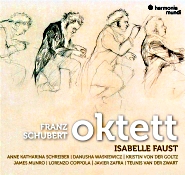 As I've rhetorically asked before, Was there ever a writer of more charming, more thoroughly delightful music than Austrian composer Franz Schubert (1797-1828)? Whether it's his symphonies, his songs, his chamber music, his church music, his incidental music, or his stage pieces, it's all so enjoyable it's a wonder he wrote so much of it in so short a time (he died at age thirty-one). And it's an even greater shame that so few people in the composer's lifetime got the chance to hear his work. Still, the years since his death have proved his worth, and the invention of the phonograph further cemented his place in musical history.

On the present album, we have one of his crowning achievements, the Octet in F major D.803, for clarinet, horn, bassoon, two violins, viola, cello, and double bass, which Schubert wrote in 1824 on commission from clarinetist Ferdinand Troyer. The fact that Troyer asked for a piece patterned after Beethoven's Septet, Op. 20 and that Schubert delivered an octet instead (adding a second violin) probably just proves how creative and resolute Schubert could be.

Anyway, Schubert divided the Octet into six movements, the first one based on a theme from his song "Der Wanderer" and the fourth movement variations on a theme from his Singspiel "Die Freunde von Salamanka." Ms. Faust and company provide a loving and enthusiastic interpretation that well captures the joy of Schubert's music. The two slow sections--the Adagio and Andante--are poignant, and I especially liked the sweetness of the variations in the latter movement (so similar in spirit to those of the "Trout" quintet). The ensemble plays the scherzo in appropriately playful fashion, and they ensure the finale is as big and dramatic as it should be without overshadowing its good cheer.

As a historical performance, Ms. Faust's recording comes into direct competition and comparison with one of my longtime favorites, that by Hausmusik (EMI), recorded in 1990. In the opening movements, Hausmusik are marginally more lively and spontaneous, but by the last movements Mr. Faust and her company appear almost equally felicitous. Sonically, the earlier disc is a bit more transparent, but certainly the warmer acoustic of the Harmonia Mundi disc flatters the music in its own way.

To accompany the Octet Ms. Faust and her friends offer two of Schubert's Five Minuets D.89, from 1813, arranged for octet by Ms. Faust's friend, the composer, conductor, and pianist Oscar Strasnoy. These are hardly trifling pieces, and the present group help them attain what one might call at least a measure of apt nobility.

Artistic Director Martin Sauer and engineer Tobias Lehmann of Teldex Studio Berlin recorded the music at Mediapole Saint-Cesaire, Arles, France in July 2017. The sound, as I mentioned above, displays a warm, ambient glow that nicely complements the warmth of Schubert's music. It's a tad close for my liking but captures instrumental color well enough. There is also a moderate sense of depth to the ensemble as well as space around the instruments. If played back at a realistic level, the recording sounds most enjoyable.