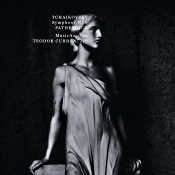 You'll forgive me if I keep thinking of the Greek-born conductor, musician, and actor Teodor Currentzis as a new and upcoming young conductor. He was, in fact, in his mid forties (b. 1972) at the time of this writing, he's won numerous awards, conducted even more concerts, and made a dozen recordings. In 2004 he formed the MusicAeterna Orchestra (and later the MusicAeterna Chorus). Although audiences probably best know him for his opera productions, he's no slouch at purely orchestral music, either, where critics have found his direction everywhere from electrifying to terrifying. At the very least, you can say he's enthusiastic, as this recording of Tchaikovsky's Sixth Symphony demonstrates.

Russian composer Peter Tchaikovsky (1840-1893) wrote his Symphony No. 6 in B minor, Op. 74 "Pathetique" in the last year of his life, and it was his final work before he died. The ensuing century brought it growing fame, and today person can hardly doubt its value as one of the late-Romantic period's most-popular works. The title "Pathetique" in Russian means "passionate" or "emotional," which is how most conductors, like Currentzis, play it--big, bold, and red-blooded. It's just that Maestro Currentzis perhaps takes the "passionate" direction a step further than most.

The work begins with a fairly lengthy introduction, building in agitated fashion before culminating in the music's famous central theme. Currentzis takes this opening with more than adequate agitation; indeed, with more agitation than one normally hears. Then, he goes into the main theme with a delicacy one doesn't often hear, as well. Although the result is a timing for the first movement that differs little from the half dozen comparison recordings I had on hand, it's made up of more variable rubato, more stops and starts, more lengthened and shortened notes and phrases, and definitely more volatile dynamics than I have ever heard before in a performance of this music. There were several moments in the proceedings when the orchestra positively jolted me upright. One can question whether this is purely showmanship on Currentzis's part or whether it suits the mercurial nature of Tchaikovsky's music. There is no doubt it will keep you awake.

The second-movement is another of the composer's famous waltzes, followed by a zippy third-movement scherzo, and ending in a mournful Finale. Currentzis takes the waltz in headlong fashion, perhaps faster than the usual waltz tempo; yet, like the rest of the performance, it seems perfectly attuned to the idiosyncratic nature of the rest of the reading. The scherzo is as peppy and lively as any you'll hear, but by this point we expect that of Currentzis. The Finale is probably the least controversial part of the recording, with Currentzis calming down and offering a fine, passionately soulful conclusion to the music.

In all, I dunno. If you like your Tchaikovsky expressive and emotional to the nth degree, you'll get that from Currentzis. It's not subtle, not terribly nuanced, not delicate or polished. It's Tchaikovsky unrefined, undiluted. Like the sound I'll mention next, listeners are apt to find the performance immensely satisfying or overwhelmingly unwelcome.

The disc's jewel box comes enclosed in a glossy paper slipcase and a booklet essay by Maestro Currentzis himself. I'm afraid I couldn't get through much of the conductor's prose, which tends to be as flashy as his music making.

Damien Quintard produced, recorded, mixed, and mastered the album at Funkhaus Nalepastrasse, Berlin in February 2015. To put this kindly, think of your seating position as being in the front one or two rows of an auditorium. The orchestra is spread out very wide in front of you, and the instruments are practically in your lap. The effect is not without its commensurate thrills, but it may take a moment to get used to. This is the kind of close miking one usually associates with live recordings; however, nowhere on the packaging does it indicate this is a live recording. So, it's apparently just a close-up studio performance. It certainly gives clarity, life, and dynamism to the sound, although there isn't a lot of orchestral depth to give us a feeling of reality; nor is there much hall resonance; and there are some odd, audible effects in the final movement. The dynamic range and sonic impact may for some listeners compensate for the recording's eccentricities, though, and provide more excitement than they've ever heard before in this symphony. Like Currentzis's interpretation of the music itself, the sound may either delight or infuriate you.