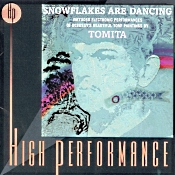 The late Japanese composer and performer Isao Tomita (1932-2016), one of the pioneers of the musical synthesizer, made quite a splash in 1974 with his album of electronic music, "Snowflakes Are Dancing." RCA's rear-cover blurb states, "The blockbuster album that started it all...." But I rather suspect RCA forgot about Wendy Carlos, whose "Switched-on Bach" from 1968 predates "Snowflakes" by some years. Nevertheless, "Snowflakes" did strong business and continues to sound good in this remastered "High Performance" CD edition from RCA.

A series of short selections from the pen of French impressionist composer Claude Debussy (1862-1918) make up the program. The selections translate well into the world of the Moog synthesizer probably because they were mostly written for solo piano. Besides "Snowflakes," there are such familiar tunes as "Reverie," "Clair de lune," "The Engulfed Cathedral," "The Girl With the Flaxen Hair," "Golliwog's Cakewalk," and others, plus a bonus track of "Prelude to the Afternoon of a Faun" from Tomita's 1975 LP, "Firebird." Although I realize that all of the original piano selections were long ago adapted for full orchestra, Mr. Tomita and his synthesizer may have scored a success here by not trying to reproduce all the colors of the symphonic rainbow.

Drawbacks? Purists will say this isn't really Debussy, that Tomita takes too many liberties with the scores, that the original composer would not recognize his own music. Nevertheless, if it sounds good to you, take your chances and forget about the critics. My only quibble is that even with the bonus track, the album provides only a little over fifty minutes of material. So expect a short program.

Anyway, this disc is now a part of RCA's "High Performance" series, which the company remastered in Dolby Surround Sound using Weiss 24/96 technology back in the late 1990's. I'm not sure what criteria RCA used to decide which of their recordings to remaster in this line, though, because some of them have dubious sonic credentials. This recording, for example, sounds fine either with or without the new technology, yet I would hardly call it an album of audiophile material in any case.

A comparison of the new disc with its older incarnation reveals that the newer version is noticeably smoother, as expected, richer, warmer, and quieter, overall. There is also maybe a touch more high-end openness, albeit with a softer high-end, too, and very slightly wider dynamics. However, the new disc sounds less precisely localized, a tiny bit out of phase so to speak. It is not unpleasant, given the artificial nature of the music making to begin with, but I wonder if it has anything to do with the Dolby Surround encoding system that RCA used in the remastering. RCA tell us that the disc is compatible with regular two-channel stereo and monaural, but maybe not perfectly. I dunno.

In any case, "Snowflakes Are Dancing" is one of the few synthesizer albums I have had in my collection since its issue, and this newer edition does it no real harm.