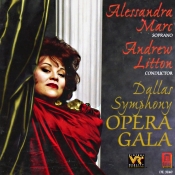 I had only a couple of misgivings about the disc. First, I would have preferred hearing from both a soprano and a tenor and maybe others at a "gala," putting a little more variety into the show. "Gala" suggests a festive event featuring, I would have hoped, more than a single star. Ms. Marc performs a recital. Maybe it's a gala recital.

Second, I have never been fond of live recordings, this one made on the nights of September 17-19, 1998, in the Eugene McDermott Concert Hall of the Morton H. Meyerson Symphony Center in Dallas, Texas. Trying to keep an audience quiet for more than an hour is the first problem, although the coughs and sneezes that customarily accompany these things seem pretty well under control. The applause between each number is another matter. Yes, it helps put the living-room listener into the concert hall to participate in the sense of occasion. Yes, it is also a distraction to anyone who just wants to enjoy the music.

Nor did I care to play the session as loudly as I found necessary to experience Delos's "Virtual Reality." Alas, nothing is perfect. Some recordings sound wonderful at low gain and get raucous, bright, or shrill as they are played louder; this one, though, sounds boring at low levels but comes to life at higher volume. In fairness, it sounded fine played back on my 5.1-channel home-theater system in another room, where the rear speakers handled some of the ambient informaton, and the sound is brighter and leaner to begin with. In any case, close all the doors and windows before listening, unless your neighbors are opera lovers.

So, as I say, played loudly, this album of live opera extracts can sound excitingly alive. Played back at a normal-to-soft level, and it will sound dull and indistinct, fading well back from the speakers, veiled and soft. I'm mentioning this because the first impression some listeners may get is that the disc is too distant and clouded. In fact, it was recording engineer John Eargle's usual way of miking, using Delos's "Virtual Reality" process, a technique that picks up a good deal of side and rear-wall ambiance for the sake of multi-channel, surround-sound playback. Ordinary two-channel reproduction may suffer, however, in that the reflective sounds can overpower the direct sound unless the volume is tweaked up a notch.