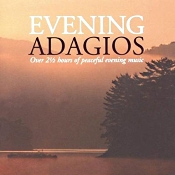 Compilations and more compilations. The classical music industry has been living off its old catalogue for quite a few years now, which in some cases is a bargain for the music collector who needs to have everything. The two-disc set under review is from Decca in its "Adagio" series from 2001, this one called "Evening Adagios." They released a slew of other such collections around the same time titled things like "Romantic Adagios," "Violin Adagios," "Vivaldi Adagios," "Movie Adagios," "Baroque Adagios," and on and on, all of them two disc sets and mid-priced, culled from Decca's back stock of big-name players.

There's certainly a lot of beautiful music one can listen to here, and one can hardly quibble about the performances, with artists like Vladimir Ashkenazy, Arthur Grumiaux, Pascal Roge, Pepe Romero, Radu Lupu, Frederick Fennell and the Eastman-Rochester Orchestra, Neville Marriner and the Academy of St. Martin in the Fields, Charles Dutoit and the Montreal Symphony Orchestra, Jeffrey Tate and the English Chamber Orchestra, I Musici, Sir Colin Davis, Riccardo Chailly, Karl Munchinger, Istvan Kertesz, and many more doing the music-making.

To name just a few of the thirty items represented on the discs, there are the usual suspects: Debussy's Claire de lune, Barber's Adagio for Strings, Mascagni's Intermezzo, Faure's Pavane, Saint-Saens's The Swan, Chopin's Nocturne No. 2, Bach's Air on a G String, Elgar's Sospiri for Strings, Beethoven's Moonlight Sonata, and so forth through thirty selections and a total of 151 minutes.

Apparently, Decca meant their interpretation of "adagio" in the broadest sense; that is, any slow, leisurely movement, as the composers of many of the items included in the set actually called them Andantes, Nocturnes, Andantinos, Largos, and the like. But a rose by any other name, they're all lovely and make for pleasant, easy listening.

Decca cleaned up and prettified all the sound, homogenized it some would say, despite the fact that some of the numbers date back to the Fifties. In fact, Mercury originally recorded the opening piece, Claire de lune, back in 1959. It doesn't have quite the open airiness of the Mercury and HDTT remasters, but it does blend right in with the digital efforts from as late as 1999. While I wouldn't call it audiophile sound, and one can certainly hear better sound in individual cases, the relatively relaxed nature of it does compliment the music.

The whole collection, in fact, features clear, smooth sound, and I should imagine that's all that matters in this kind of material. The performances are generally beyond reproach.