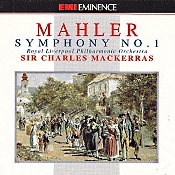 When I first heard this 1992 recording, I couldn't remember listening to a more wholly satisfying Mahler First Symphony in quite a while. Indeed, after comparing it to a handful of distinguished Mahler Firsts in my collection, I was convinced it was among the best of the lot in terms of overall control, symphonic structure, intensity, atmosphere, and sound. That initial opinion still stands.

When CDs became popular in the early 1980's, it was Austrian composer and conductor Gustav Mahler (1860-1911) whose symphonies became quickly represented in the catalogue. In spite of a late start (but thank you maestros Walter, Bernstein, Klemperer, Solti, and others), Mahler became the darling of the audiophile music-loving set, and for good reason. His works combine good, old-fashioned nineteenth-century Romantic melodies alongside often bizarre, chaotic, experimental twentieth-century modernism. The results were perfect for musical enjoyment and pure sound.

No better are these characteristics displayed than in Mahler's First Symphony, where the opening movement begins with a mysterious awakening of Day or Spring or whatever, followed by fanfares and then several lush, rhapsodic tunes. The Scherzo is Brucknerian in concept, leading to a Funeral March that only Mahler would have dared: part parody, part wistful musing, and entirely peculiar. The Finale starts with a thunderous series of orchestral crescendos, followed by bits and pieces of the first movement's themes, settling into rich romance, and ending in strong, solid affirmative concluding outbursts.

Mackerras handled all of this with the ease of one who had been conducting Mahler all his life, which he may have been doing but not necessarily recording. He doesn't quite project the opening mists as atmospherically as Solti in his LSO account (Decca), but it's close, and then Mackerras launches into the most tightly controlled Mahler tune-making possible, a control that never oversteps the bounds into melodrama or sentimentality as Bernstein sometimes does in his last, DG, account.

To me Horenstein (Unicorn) always seemed to suggest the broad symphonic scope of the symphony better than anyone else, finding links among the varied movements rather than just playing them as separate and disparate entities. Well, Mackerras does much the same thing, with tempos that are quick but never fast or breathless. He presents a cogent portrait of the work as a whole, heightening our awareness of each movement's significance without the symphony ever losing internal cohesion or global unity. Needless to say, the conductor is also quite exciting when called upon, as in the onset of the final movement, and as rapt and mocking as needed. As I say, it all seems to work pretty well together.

It's a shame that EMI only made the 1991 performance available on their Classics for Pleasure and Eminence labels, which get a fairly limited distribution now that Warner Classics have taken over the label. It is for this reason that I only stumbled upon it about a decade after Mackerras recorded it (and that was more than a decade ago that I even found it). The sound is not so robust in the bass as Tennstedt's LPO recording, but it is otherwise detailed and well balanced.

Bernard Haitink (whose last rendering with the Berlin Philharmonic on Philips) is also quite good, once remarked that he believed one should play Mahler as straight as possible and the dramatics would take care of themselves. Mackerras observes this dictum and proves that Mahler can be just as powerful on his own as he can with any added histrionics from the conductor. Obviously, I recommend the disc highly.