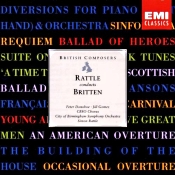 When many of us think of twentieth-century English composer and pianist Benjamin Britten (1913-1976), no doubt what first leaps to mind are his most-popular pieces: The Young Person's Guide to the Orchestra, the Spring Symphony, and the War Requiem or his operas Peter Grimes, Billy Budd, and The Turn of the Screw. To supplement these standard items, this two-disc rerelease from Sir Simon Rattle (when he was conducting the City of Birmingham Symphony Orchestra) and EMI (now Warner Classics) presents a collection of the composer's early work as well as several pieces from his final period. Much of it is lesser-known material, and I cannot admit to liking all of it equally, but it is certainly a worthy adjunct to the composer's more-famous compositions, and EMI recorded it splendidly.

EMI arranged the selections on the discs to accommodate a comfortable concert program rather than offering the music in any chronological order. It begins with An American Overture, which never got performed in Britten's lifetime and only surfaced shortly after his death in 1976. Rattle premiered it with the CBSO in 1983. Next is Ballad of Heroes, a solemn cantata for voice, chorus, and orchestra written in 1939, commemorating the British heroes who fell in the Spanish Civil War. The Diversions for piano and orchestra is a more conventional set of variations, although for Britten typically stark. Praise We Great Men is another late work, incomplete at the composer's death and never played until 1985. Britten based it on a poem by Edith Sitwell. Concluding disc one is probably the most familiar music of this round, the Suite on English Folk Tunes: "A time there was..." from 1974. Although Britten used some melodies from Percy Grainger and dedicated it to the earlier champion of English folk tunes, the tendency of the pieces is more serious than most of the things Granger came up with.

Disc Two begins again with an overture, Canadian Carnival from 1939, a series of dances that are among the lightest and easiest listening of the album's fare. The Quatre Chansons Francaises are notable for being among Britten's earliest works, dating from 1928 when the composer was only fourteen. And I liked A Scottish Ballad quite a bit, perhaps because it comes down via more traditional lines than the rest of Britten's output.

The program concludes with probably the best-known composition in the whole set, the melancholy Sinfonia da Requiem from 1940, which has a fascinating history, being originally commissioned by Japan to honor one of their dynasties. When the Japanese found that the Requiem had Christian implications, they rejected it, causing a rift that lasted until 1956 when Britten conducted a broadcast performance of the work in Tokyo. I suspect World War II didn't help them reconcile their differences too soon, either.

Anyway, Sir Simon and his City of Birmingham players perform all of the music earnestly and affectionately, EMI recording it between 1982 and 1991. The Sinfonia da Requiem may be of special interest to audiophiles because it contains the biggest drum strokes, the widest dynamic range, and the strongest impact of any of the pieces represented.

Throughout the recordings one is aware of a realistic stage depth and generally excellent orchestral imaging. There is some congestion, however, at louder climaxes, but it is not excessive enough for most listeners to notice, especially not by those folks concentrating on the music itself. I can easily recommend the set to adventurous music lovers and serious Britten enthusiasts alike, especially now that a few years have gone by, and many retail sites are offering it at a ridiculously low price.

Email ThisBlogThis!Share to TwitterShare to FacebookShare to Pinterest
Labels: Britten