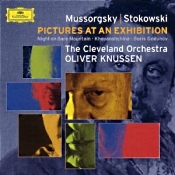 Most folks are probably familiar with Maurice Ravel’s orchestration of Russian composer Modest Mussorgsky’s piano portraits, Pictures at an Exhibition, but fewer people have probably heard Leopold Stokowski’s orchestration of them. Of course, we all know Stokowski’s rendering of Night on Bare Mountain from having seen Fantasia, and if that kind of thing appeals to you, then this disc might be right up your alley.


Critics often complained about Stokowski (and still do, long after his death) for his glamorizing of classical music, either by changing the music itself or by interpreting it differently than other conductors. Be that as it may, the fellow had (and still has) quite a following of loyal fans. Indeed, much of the man’s recorded work still impresses me, and I can understand why so many listeners adore him. This disc of Stokowski’s orchestral transcriptions of several Mussorgsky works will either convert you or send you packing.


Stokowski made his version of Pictures at an Exhibition in 1939, more than a decade and a half after Ravel did his familiar reworking. My first and lasting impression of Stokowski’s version was one of greater fluency, greater poetry, and greater romanticism than the Ravel orchestration. Stokowski utilizes a lot more lush strings, which leads to much of this feeling. However, on most recordings it’s hard to tell how much of this effect is the result of Stokowski’s orchestration, or, in the case of this recording, the result of the Cleveland Orchestra and Maestro Oliver Knussen. 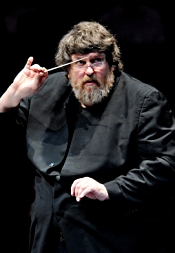 Anyway, the combination of Stokowski, the Cleveland players, Maestro Knussen, and the DG engineers provides us with an ultrasmooth, ultrasophisticated Pictures, much different from the Ravel arrangements I’ve gotten used to from the likes of Reiner (RCA), Muti (EMI), Maazel (Telarc), and Ansermet (Decca). In the process of refining the score, Stokowski and company render it less volatile, less explosive, and, well, less colorful. In fact, much of the color seems washed out of the work compared to the aforementioned renditions. However, the listener might find “The Hut on Fowl’s Legs” fascinating for its herky-jerky dynamism, and certainly “The Great Gate of Kiev” comes across with a splendid grandeur.


More interesting for me was the shorter Entr’acte to Khovanshchina, which is direct, to the point, and incisive. Maybe it’s too short, though, for its own good. Knussen handles the other works, Night on Bare Mountain and the Boris Godunov Symphonic Synthesis quite well, too, although I doubt many potential buyers are looking just for these things.


I also wonder how much the DG engineers are responsible for the music’s smoothness, to the extent of having little apparent bite. The sound is so polished and comfortable and so multi-miked, one is in danger of calling it mood music. Yet the sound does not lack a deep bass or a strong dynamic impact. Curious. I think some listeners will respond to it quite favorably, especially if they have become tired of listening to the hard, shrill, bright sound found on some CDs. I didn’t find DG’s sound at all objectionable; I just didn’t find it particularly natural or realistic.


To listen to several brief excerpts from this album, click here: