The Rascal and the Sparrow: Poulenc Meets Piaf (CD review) 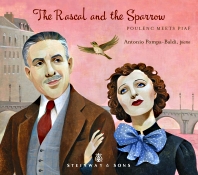 This is another of those “theme” albums. Except the theme is a little nebulous. According to the record jacket, critic Claude Rostand described French pianist and composer Francis Poulenc (1899-1963) as “a lover of life, mischievous, bon enfant, tender and impertinent, melancholy and serenely mystical, half monk and half rascal.” A nightclub owner gave popular French singer Edith Piaf (1914-1963) the nickname “The Little Sparrow.” They were both French, both popular in their field, and roughly contemporaneous. On the present album Italian-American pianist Antonio Pompa-Baldi performs piano arrangements or elaborations of music by both musicians, and to very good effect. Especially when he plays them so well, so sensitively, so captivatingly.


If you’re not sure about Pompa-Baldi, he has over a dozen recordings to his credit, most of them for the Centaur label. In addition, he received third prize in 1998 at the Marguerite Long-Jacques Thibaud Competition in Paris, winning a special prize for the best interpretation of a contemporary work written for the competition (Tumultes by Serge Nigg). Later, after winning the 1999 Cleveland International Piano Competition, he won a silver medal at the eleventh Van Cliburn International Piano Competition in 2001, where he also received a prize for the best performance of a new work (Three Impromptus by Lowell Liebermann). After moving to the United States, he served on the piano faculty of the Oberlin College Conservatory of Music, and currently serves on the faculty of the Cleveland Institute of Music. He has been a Steinway Recording Artist since 2003, and now that the folks at Steinway & Sons are recording him on their own label, one hopes he’ll continue to get exposure.


The Rascal and the Sparrow contains twenty-seven short selections, seventeen written by Poulenc and ten taken from Piaf standards. Things start out with Poulenc’s “Les chemins de l’amour” (“Paths of My Love”), a delightful waltz tune you can hear in part below. It’s an attractive way to begin the program because the song is so delightful with its slightly melancholic tone and always lilting rhythms, done to perfection by Pompa-Baldi, who caresses every note. All of the tunes follow suit.


Poulenc's "Hommage a Edith Piaf" (Improvisation for piano No. 15 in C minor) is probably the most-obvious thematic connection between the two musicians, although no one knows if Poulenc and Piaf ever met. Pompa-Baldi's delicate, graceful style brings both musician’s music vividly to life.

The first of the Piaf arrangements (elaborated for piano by Italian pianist and composer Roberto Piana) is "Hymne a l'amour," again a beautiful rendition of a lovely song. And so it goes. These are love songs done in a grand yet gentle manner. Who could ask for more? 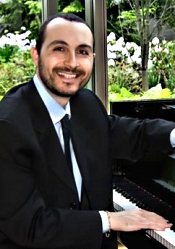 
Pompa-Baldi offers up a bouquet of fragrant blossoms, and while every song is different, they combine to create a single, smooth-flowing stream of poignant melody. It's a captivating album.


Producer Dan Merceruio and engineer Daniel Shores recorded the album at Sono Luminus Studios, Boyce, Virginia, in April 2013. The sound is full and lush, with a wide dynamic range and a mild hall bloom to provide a realistic ambience. It's a little warmer and softer than some music might require, but for the French bonbons presented here, it seems perfect. There's an airy lightness enwrapped in the resonance that offers the music its own special charms. And those long, lingering decay times add to the leisurely nature of the songs.