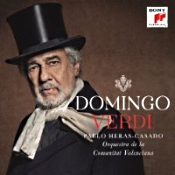 For the past four or five decades, two tenors have dominated the operatic scene: the late Luciano Pavarotti and Placido Domingo. Pavarotti may have had the more thrilling voice, but Domingo had the richer, more versatile voice. It’s always a pleasure when the man releases a new album.


The back cover of Domingo’s latest CD (2013), titled simply Verdi, explains that “for the first time the world-renowned tenor has released an album of baritone arias--an exceptional document of Domingo’s discovery of opera character new to him, and a tribute to Verdi, who has played a crucial role in Domingo’s career. ‘Verdi is a wellspring of great music, and every lyric singer is grateful to him. So for me this recording is a special celebration and an act of thanksgiving and love toward Giuseppe Verdi.’” What goes without mention here is that doing an album of baritone arias is also a nod to Domingo’s age, since the man is as of this writing in his early seventies. Not that I believe he isn’t still fully capable of doing tenor arias; just saying. Besides, he has already recorded every major tenor aria there is, so perhaps it’s best to give him the benefit of doubt.


Anyway, Domingo provides well over an hour of music on the album, eighteen tracks from nine different Verdi operas, starting with “Perfidi! All’anglo contro me v’unite!” from Macbeth. No, these aren’t the most-common numbers for non-opera fans, and as I have less interest in opera than I should, I found most of them only vaguely familiar. Nevertheless, one cannot deny that Domingo has the talent for them.


As always, the voice is still strong and flexible. The intonation remains remarkably accurate, and the tone smooth, mellow, and mellifluous. What's more, although these are baritone arias, Domingo's natural tenor continually manifests itself. Some minor tremolo creeps in at times, whether intentional or not. It's not distracting, and many listeners will welcome it.

And so it goes through further selections from Rigoletto, Un ballo in maschera, La traviata, Simon Boccanegra, Ernani, Il Trovatore, Don Carlo, and La forza del destino. The voice remains relatively strong, and if anyone doubts the power, one has only to listen to "Si, la mia figlia!" to learn otherwise. The control is still there, the projection, the phrasing, the precise articulation and control, even at his age, if not always so exacting as in his prime.


As important, the poetic qualities of Domingo's voice continue to manifest themselves. Listen to the lyric flow of "Di Provenza il mar, il suol" or "Il balen del suo sorriso," and you'll see what I mean. 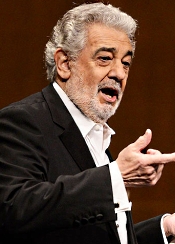 
Domingo made the recording in 2012-2013 at the Palau de les Arts “Reina Sofia” Auditori, Valencia, Spain and Angel Recording Studios, London, England. The sound displays an acceptable depth of field for a recording of this sort. There is good dynamic impact, too, making for a fairly realistic presentation. Clarity seems fine most of the time as well, although there are occasions when the orchestral accompaniment can be a touch bright. It's an overall welcome sound, in any case.