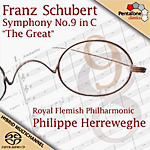 The Ninth Symphony of Franz Schubert (1797-1828), the "Great" and final numbered symphony, which the composer dated 1828, has an oddball history because, of course, he didn't really write it in 1828, and it probably wasn't really his final symphony. The odds are he wrote it much earlier than the year of his death, which probably makes little difference since, as with the rest of his orchestral music, he never published any of it, anyway. The Ninth didn't even see a public performance until 1839, a full eleven years after Schubert's death. Yet today it is one of the basic components of the classical repertoire. Such is fate.

It's nice to see conductor Philippe Herreweghe giving it a shot, especially since Herreweghe just finished up his Beethoven cycle and what better a work to follow it up than the Schubert Ninth, with its obvious Beethoven connections. Herreweghe is one of those conductors who perhaps never pops to mind as among the absolute greatest conductors of our day but who never disappoints with his recorded performances. While he's neither foursquare nor revolutionary, he never takes an easy route, either, as this recording demonstrates.

In the opening movement, Herreweghe creates the proper dimensions, meaning he plays it big and grand. At the same time, it is not overpowering, the conductor maintaining Schubert's characteristic lilt in its gait. When the Andante section turns into a full-fledged Allegro, Herreweghe isn't hesitant about cutting loose. Yet despite there being much energy here, it is not always at the service of the music. It's not exactly like the famous Krips-Decca recording, which continues to set the benchmark for total delight in the work, making each transition seem perfectly natural. Herreweghe does his best in a vigorous interpretation of the first movement that doesn't quite capture all of the composer's robust charm.

In the second-movement Andante, however, Herreweghe seems more at home, taking the combined march and lamentation at a brisk and lively pace. It's a neat trick to make what can be a dirge into something more exciting. Perhaps, though, the conductor does miss a little something in terms of emotional charge by doing so, and maybe the shifts into the middle section's sweeter tones and back are a bit abrupt as a consequence. It's a small matter.

The third-movement Scherzo sounds a touch heavy to my ears, losing some of the Schubertian bounce in its step but making up for it with a good deal of passion. Then Herreweghe produces a finale of truly "Great" proportions, the transitions and tempos by now sounding just right. The very end, the closing note, does appear a bit odd in the way it cuts off, but it's the only distraction.

Although this may not be a Schubert Ninth for the ages, Herreweghe certainly offers for the most part a well-considered interpretation and a well-produced one.

Recorded in Queen Elizabeth Hall, Antwerp, Belgium, 2010, the sound on this PentaTone hybrid stereo/multichannel disc is ultrasmooth, warm, and a tad soft, at least played through two speakers as I played it. Perhaps the small degree of midrange veiling I heard disappears when four channels come into play, I don't know. Nevertheless, the timpani shine through with clarity, and the dynamics are wide.  Impact is good, too, so while some of the orchestral sound seems a tad tame, other portions impress one with their quick transient response. If you've heard previous recordings by Herreweghe on PentaTone, this one is unlikely to let you down.