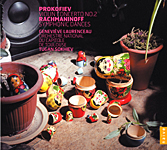 Now, I know what you're probably wondering. You're wondering what's for dinner tonight. And how you are going to watch that final episode of "The Chicago Code" with your mother-in-law visiting. And, maybe, just maybe, you're wondering what the two pieces of music on this CD have to do with each other.

The connections are tenuous, but they're close enough. For example, both Prokofiev and Rachmaninov were Russian. They were contemporaries of each other, Rachmaniov a few years older. They were both pianists and composers. And they created the two works represented here within five years of one another. Personally, I prefer discs that couple works by the same composer. It makes finding things easier. But at least I can understand the reasoning behind Naive Records making the coupling they did.

Sergei Prokofiev (1891-1953) wrote his Violin Concerto No. 2 in G minor, Op. 63, in 1935, just before he returned from a self-imposed exile from Russia and while turning to what he called a "new simplicity" in his music. The Concerto begins with a lonely violin solo that gets only a touch hectic before settling down to a more plaintive tone. Prokofiev was obviously softening his earlier dissonant style and relying more on melody. It couldn't have hurt that the Russian musical censors of the day probably appreciated his new attitude as well.

Ms. Laurenceau's violin takes flight about halfway through the first movement and remains in a soaring mode for most of the work. Then, in the slow movement we get a lovely Andante assai, with a gently flowing, lilting melody played above a sweet, rhythmic arpeggio accompaniment. It's among the most-charming things Prokofiev ever wrote, and again Ms. Laurenceau handles it with authority. The final movement closes the show in a pulsating, waltz-like mood, ever more-pronounced percussion elements overtaking the Gypsy swirls of the violin. Ms. Laurenceau gives the instrument a workout as the music comes to a sudden, climactic end.

Sergei Rachmaninov (1873-1943), his name on the disc Americanized as Sergey Rachmaninoff, would make the Symphonic Dances (1840) his final composition, although he lived several years thereafter. He drew upon material from many years before, an abandoned ballet called The Scythians, for his somewhat menacing music. The Dances begin with a big, militaristic introduction before developing a more restrained, sometimes melancholy, atmosphere. Always the Romantic, even to the end, Rachmaninov infuses the three movements with a wealth of voluptuous melodies, which conductor Tugan Sokhiev draws out eloquently, expressively, and expansively, despite some relatively fleet tempos.

The only minor detail about Sokhiev's recording of the Symphonic Dances is that it goes head to head with several other superior recordings, those of Andre Previn and the London Symphony, who outshine Sokhiev in sheer delivery, and Eiji Oue and the Minnesota Orchestra, whose Reference Recording is just that, a state-of-the-art reference recording. Nevertheless, Sokhiev's performance is worthy of mention by their side.

Naive recorded the two performances in July, 2010, in La Halle aux Grains, Toulouse, France; and, luckily for us, they did not record it live. While the sound in the Violin Concerto is a tad forward and the violin rather prominently placed, there is otherwise a good blend of instruments involved. The orchestral sound is never too edgy or bright, although it is slightly flat dimensionally. There is a moderately wide stereo spread, a modest dynamic range, and reasonably acceptable impact. However, frequency extremes, especially at the bass end, might have been better extended.

Needless to say, the Symphonic Dances are more dynamic, and the sound opens up considerably more than it does in the Concerto, which only has to concentrate on highlighting the violin. In the Dances, we get a bigger, bolder, more-dimensional sound, even though, as I said, it doesn't really compete with the sonic quality of the Reference Recordings disc, which is in a class by itself.