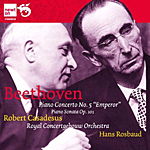 This recording from French pianist Robert Casadesus, conductor Hans Rosbaud, and the Concertgebouw Orchestra, was among the first LP's I remember owning of the "Emperor" Concerto, so it's good to find it back in the catalogue in a 2011 CD reissue from Newton Classics. Although it was Philips who recorded it in the early Sixties, I seem to remember owning it on the Odyssey label, perhaps the later budget-priced American version I bought in the late Sixties when I first came to it. As I put this rerelease in the player, I wondered if it would live up to my expectations or live down to my nostalgic memory. It turns out to be perhaps a little of both.

Beethoven wrote the Piano Concerto No. 5 in E Flat, Op. 73, in 1809, premiering it in 1811 and dedicating it to the Archduke Rudolf, a student and patron of his at the time. It would be the composer's final piano concerto, and it would go on to become one of the man's most-popular pieces of music.

The Casadesus performance is one of lucid textures and sharply defined contrasts. With any rendition, the opening Allegro must be bold and imposing, with its long, grand introduction, and it is here, with Rosbaud adopting a quick but never breathless pace, and Casadesus providing a remarkably gentle yet entirely heroic solo contribution. Each nuance seems calculated to maximum effect without distorting the general outlines of the work, from the quietest to the most-blazing passages.

In the Adagio, Casadesus appears purely focused on refusing to sentimentalize the lovely central theme. Nevertheless, he doesn't do it any great injustice by taking a brisker, should I say more daring, clip than most other pianists. I must confess, however, that I rather prefer a more-romanticized approach; maybe it's my age showing.

The performers then tackle the finale in arresting style, with Casadesus taking the lead in his usual poetically objective manner. Even so, the performers don't provide quite the power of other productions, preferring instead to concentrate on clearly shaping and defining the music. As a result, we get a more coolly analytical Fifth Concerto than most others but one that offers its own subtle rewards.

Sharing the disc is the little Piano Sonata No. 28 in A, Op. 101, which Beethoven composed in 1817. Casadesus again approaches the piece in a fairly pragmatic way, bringing the music to life in the Vivace alla marcia but in the rest of the piece content to let the notes take care of themselves.

Philips recorded the Concerto in 1961, capturing a somewhat thinner string tone, slightly less-ambient bloom, less bass, and less stage depth than they would in later Concertgebouw productions; otherwise, the sound is quite clear and dynamic. There is a beautifully realized piano sound, the instrument well integrated with the rest of the orchestra. The miking also seems a tad closer than common for a Concertgebouw recording, making the upper frequencies a tad bright. Be that as it may, the piano sounds just right, very warm and realistic. Fortunately, the disc's advantages overshadow its deficiencies, which are minor, the upshot being a transparent and becoming recording.

Casadesus recorded the accompanying Sonata a few years later, in 1964, during a live concert, evident from the sometimes intrusive audience noise. Setting aside the distractions, the piano again sounds beautiful.