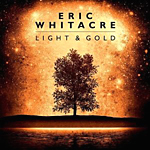 American composer, conductor, and lecturer Eric Whitacre (b. 1970) has enjoyed a relatively sudden spurt of popularity in the past half dozen years or so, thanks in large part to several best-selling record albums of his mostly choral music, as well as to his "Virtual Choir" projects on YouTube. In 2010 he signed a long-term record contract with Decca, the present disc apparently his first release for the company.

You may have heard his Hyperion recording Cloudburst several years ago; it earned him a Grammy nomination. Light & Gold is much in the same vein, the music sung and played by various groups, including his own Eric Whitacre Singers, the choir Laudibus, the King's Singers, and the instrumental Pavao Quartet, with assorted soloists thrown in. Light & Gold roughly follows a path from morning till evening, with texts running high to Latin, which Whitacre, a student of the Juilliard School, seems to favor.

The program begins with one of Whitacre's most-popular pieces, the title work "Lux Aurumque" ("Light and Gold"), written in 2000 and sung by Whitacre's choir. The work is sweet, pure, amiable, and elegant, an appropriate representative of the remaining music on the disc. It is quite accessible, quite lilting and lovely, the singers' voices floating over the listener in angelic tones. The composer based "Lux Aurumque" on a poem by Edward Esch, translated into Latin: "Lux, Calida gravisque pura velut aurum Et canunt angeli molliter modo natum: Light, warm and heavy as pure gold and angels sing softly to the new-born babe."

The other pieces on the program follow suit. There are sixteen brief choral works altogether, the next being "Five Hebrew Love Songs" from 1996, which Whitacre describes as "troubadour songs for piano, violin and soprano," here adapted for choir and quartet. Each song is a little "postcard" capturing a specific moment that he and his girlfriend at the time (and now his wife) Hila Plitmann shared, she writing the lyrics and he doing the music.

"The Seal Lullaby" is especially fetching, written in 2004 for a movie that never happened. Like the other melodies, it is appealingly simple and direct. "Leonardo Dreams of His Flying Machine," composed in 2001 to a poem by Whitacre's friend Charles Anthony Silvestri, appears more animated than the others, with a stronger female choir. And so it goes unto the last track on the disc, "Sleep," which Whitacre originally intended as music for the Robert Frost poem "Stopping by Woods on a Snowy Evening." Unfortunately for the composer, Frost's estate had shut down any use of the poem, so Whitacre asked his friend, the aforementioned Silvestri, to write new words to the music, which we have here.

Now, there is a "however." While I doubt that any listener would not respond to the gentle honesty and often ravishing beauty of Whitacre's music, I couldn't help thinking as I listened that a lot of it seems alike: the soft, tranquil tone; the calm, soothing tempos; the straightforward, sometimes sentimental style; the uniformly reassuring voices. It all tends to make the individual pieces merge into one indistinguishable mass. A lovely mass, to be sure, but a lightweight, cushy, more-than-comfortable mass as well.

One can hardly fault Decca's sound, recorded at St. Silas Church, London, in August, 2010. Voices are clean and smooth; the stereo spread is extensive; and midrange transparency is ideal, without being in any way bright or abrasive. In other words, the disc's audio qualities complement the pleasurable nature of the music.

Email ThisBlogThis!Share to TwitterShare to FacebookShare to Pinterest
Labels: Whitacre