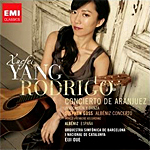 If the thought of a relatively young Chinese woman playing the solo guitar part in Rodrigo's most-famous concerto gives you pause, it shouldn't. Xuefei Yang (b. 1977) is a superb guitarist and presents a worthy, if slightly different, take on the music. What's more, she offers three other pieces on the disc that deserve attention. Let's take them one at a time.

First, there's the celebrated Concierto de Aranjuez, which Joaquin Rodrigo (1901-1999) wrote in 1939 and which pretty much established Rodrigo's reputation as a leading composer for the classical guitar. Despite the fact that Rodrigo always claimed the gardens of Palacio Real de Aranjuez inspired the writing, because he wrote it at the end of the Spanish Civil War, one can't help thinking that at least a part of it is tinged by the melancholy of those war years. Rodrigo's wife denied this, saying the slow movement drew on both their happy days together and a miscarriage she endured. Whatever, it's a beautiful, evocative piece of music, and Ms. Yang pulls it off nicely.

The opening movement is lively enough, yet Ms. Yang also brings to it a sense of great dignity and refinement. It's more than just pretty music; it's quite emotionally shaded. Still, it's Ms.  Yang's handling of the middle-movement Adagio that may raise eyebrows. I don't think I've ever heard it played with such heartfelt sentiment and delicacy. The guitarist seems to put her soul into each note she plays, and the listener cannot help coming away with a newfound respect for the concerto and for Ms. Yang. Rodrigo described the concerto itself as capturing "the fragrance of magnolias, the singing of birds, and the gushing of fountains" in the gardens of Aranjuez, and certainly the final movement, marked Allegro gentile (suggesting music played quickly, cheerfully, yet gracefully and genteelly), conveys just such a spirit most of all. Ms. Yang gives her thanks in the booklet note for having a real Spanish orchestra (Orquestra Simfonica de Barcelona I Nacional de Catalunya) supporting her in the music, the same orchestra that premiered the work so many years ago. It certainly doesn't hurt.

Among the other pieces on the program is The Albeniz Concerto by Stephen Goss (b. 1964). Goss wrote his concerto in 2009 as a tribute to Isaac Albeniz (1860-1909), the great Spanish pianist and composer, Goss using many of the man's piano themes for the piece, which Ms. Yang and the Barcelona Orchestra commissioned. While the work may not achieve the stature of Rodrigo's concerto or the virtues of Albeniz's piano music alone, it does have a pleasant style and goes down easily.

The final two pieces on the album are for solo guitar: Albeniz's Espana, Op. 165, with its prominent "Tango" the salient feature, here presented in a transcription for guitar and played as sensitively as I've ever heard it done on any instrument; and Rodrigo's Invocacion y danza (1961), probably the composer's most-popular solo guitar work, "a homage to Rodrigo's friend and mentor Manuel de Falla." It's a slightly gloomy but fascinating affair, and one Ms. Yang seems to know quite well.

Although it's hard not to enjoy Ms. Yang's music making, not everyone may appreciate the sound of the disc. EMI recorded it in 2010 at L'Auditori, Pau Casals Hall, Barcelona, placing a good deal of emphasis on the guitar. By that, I mean that while the orchestra is nicely reproduced, clean and clear, the guitar seems disproportionately large, looming out in front of the ensemble in a rather fat, bulbous manner. The fact is, the guitar doesn't sound well integrated with the orchestra but rather as though it were miked somewhere else and added later. I'm sure that wasn't the case, but with the guitar as big and soft as it appears, that's the impression it leaves. Otherwise, hardly a complaint.

Email ThisBlogThis!Share to TwitterShare to FacebookShare to Pinterest
Labels: Rodrigo