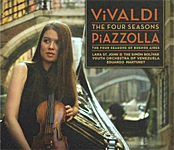 Although Antonio Vivaldi (1678-1741) wrote hundreds of pieces of music, people will probably always remember him best for his Four Seasons violin concertos, his little tone pictures with their chirping birds, galumphing horses, barking hounds, and dripping icicles. The music lover has about 800 different choices of recordings to choose among at any given time; however, that number keeps changing almost weekly as new discs arrive on the scene. This set by Lara St. John and the Simon Bolivar Youth Orchestra of Venezuela, lead by Eduardo Marturet, is one of dozens that appeared in just the last couple of years.

While I loved Ms. St. John's rendering of Mozart's Sinfonia Concertante and Violin Concertos Nos. 1 and 3, also on an Ancalagon SACD, these Four Seasons are more problematical. Her pacing here is mostly moderate, designed neither to offend nor distract, at least at first. Nevertheless, her actual playing, which she does on a 1779 "Salabue" Guadagnini, sounds sometimes a bit more florid than necessary. I wondered if on occasion she wasn't just a little too plush and personal, too idiosyncratic to the point of excess, and that did distract my attention. If one is listening to the playing technique more than to the music, there's probably something wrong. Fortunately, hers is the kind of interpretative approach one can easily get used to. In other words, you'll either love these readings or hate them. I rather liked them, but I wouldn't say I liked them better than a dozen or so favorite performances of mine.

The "Winter" concerto is possibly the best example of Ms. St. John's style because it appears to me the most touched by her particular individuality. It is odd in its wildly contrasting tempos, mood swings, and slowings down, often within the same movement. Never does she get really animated, yet she plays with considerable passion. As I say, odd.

Accompanying the Vivaldi Four Seasons are the Four Seasons of Buenos Aires by Astor Piazzolla (1921-1992), the Argentinean composer and bandoneonist best known for his tango creations. He wrote his four Seasons not as a set but as completely separate entities for his own band. Only in 1999 did Russian composer Leonid Desyatnikov arrange them for solo violin and strings and make the Vivaldi connection. While they are fascinating works, they don't have much to do with Vivaldi beyond their title. These Piazzolla pieces, each written in a single brief movement, have a distinctive Latin-dance flavor to them, evoking tones quite different from Vivaldi's. The pairing seems to me more of a marketing ploy than a completely satisfying musical decision.

Recorded in Caracas, Venezuela, in 2008, the sound on this hybrid disc comes in multichannel SACD and regular two-channel stereo.  I listened in stereo, where the sonics are big and warm and a tad heavy for my taste in this music. Judging by the booklet picture, there appear to be a couple of dozen performers involved, although it's a little hard to tell from the recording, which puts Ms. St. John slightly out in front of what seems like a multitude of players in the ensemble around and behind her. Stage depth is modest, and a lot of ambient bloom in the midrange tends to diminish ultimate transparency. My guess is that the multichannel layer may be cleaner and clearer, and the regular stereo layer folds some of the rear-channel material into the front channels, clouding the issue somewhat.

Finally, a couple of words about the packaging: namely, it's handsome and inconvenient. The disc comes housed in a cardboard foldout container that is attractive to look at. Beyond that, it's a nuisance to deal with. First, it folds out in three parts extending to some eighteen inches, thus making it cumbersome to handle. Next, there are two informational booklets enclosed--one in English and one in Spanish, French, and German--glued to the cardboard, thereby making them a chore to read. In addition, the disc come wedged into a stiff, permanent inner sleeve, defying anyone to get it out without putting fingerprints on the playing surface. Then there's the matter of the package opening left to right instead of the traditional right to left. Think of a book built backwards.