It is with great sadness that we reflect upon the death of the great Australian soprano Dame Joan Sutherland, known by her legions of fans as "La Stupenda," who has died at the age of 83. 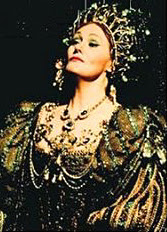 October 11, 2010:  The sheer breadth and variety of recordings Joan Sutherland made over more than 30 years recording for Decca is impressive by any standard. They include 40 recordings of 33 different operas, as well as operatic highlights, anthologies and specially conceived collections of music ranging from baroque rarities to selections from operetta and songs by Noel Coward who was a personal friend.

Joan Sutherland's unique association with Decca began in 1959 with an LP of opera arias that included two scenes from Donizetti's Lucia di Lammermoor. It was in this role that she had rocketed to international stardom overnight, when Franco Zefirelli's Covent Garden production premiered on February 17, 1959. A complete Decca recording was made in 1961 under Sir John Pritchard, and a second recording, conducted by her husband and mentor Richard Bonynge and featuring Luciano Pavarotti was made in 1971. During her career Joan Sutherland sang the role of Lucia 233 times.

Joan Sutherland's connection with Decca was first established in 1958 with Handel's Acis and Galatea, which appeared on the company's L'Oiseau-Lyre label, and during the late 1950s and 1960s both she and Richard Bonynge (they married in 1954) were at the forefront of the Handel revival. It was during Venice performances of Handel's Alcina in 1960 that a journalist first dubbed her "La Stupenda."

In 1960 Joan Sutherland recorded what can only be described as one of the most famous vocal recitals in the history of the gramophone, The Art of the Prima Donna. Conceived and devised as a homage to prime donne of a bygone era, the album (released on two LPs) became an instant best-seller, won a Dutch Edison Award in 1961, and has never been out of the catalogue. It was also in 1961 that Joan Sutherland won a Grammy for the best classical performer of the year.

Decca sends its deepest appreciation and condolences to her husband Richard Bonynge and their son Adam.