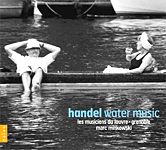 First a minor note: I don't think I'm the only person who enjoys a good-looking album cover. I often find myself staring at a well-illustrated disc jacket or booklet insert and daydreaming about the connection between the picture and the music. For instance, the Mackerras album of Handel's Water Music for Telarc features a gorgeous painting of "A View of London and the Thames," with what I take to be the King's golden barge floating down the river with his entourage of attendant vessels.  One can almost hear Handel's music floating along with them.

The present Naive disc of Handel's Water Music features a black-and-white cover picture of two people in a rowboat.

Nevertheless, the number of players here does come close to representing the number described in contemporary accounts of the Water Music première event. As you probably know, King George I ordered up the music in 1717 for a gala river party he organized. In a letter to the King of Prussia, the ambassador Friedrich Bonet provided these details: "Along side the King's barge was that of the musicians, fifty of them, who played all sorts of instruments, to wit trumpets, hunting horns, oboes, bassoons, German flutes, French flutes, violins and basses; but there were no singers. This concert was composed expressly by the famous Handel, a native of Halle and first composer of the King's Music. His Majesty so approved of it that he had it repeated three times, even though it lasted an hour on each occasion:  twice before and once after supper."

Needless to day, the forty-odd players of the Louvre present a large-scale rendition of the music, appropriate to the stature of the tunes written for a king, even though the readings do lose a little something in intimacy compared to rival productions. For period-instruments performances, they are surprisingly plush and smooth. If there is anything not here, though, I kind of missed the drums found on several other recordings, authentic to the original performances or not.

Plush or not, Minkowski and his team produce mostly zesty interpretations. Whether they are more accurate to Handel's intentions than other readings probably no one can say. Handel doesn't seem to have left any autograph scores, so we only have the evidence of a couple of eyewitness testimonies and a few manuscripts dated years later. I say "mostly zesty interpretations" because Minkowski performs the first two suites in moderation; that is, he is never excessively fast or slow. The exception is the little Suite in D major, HWV 349, where he varies the tempos considerably more than most other conductors. Anyway, in both cases, they are admirably well played.

Accompanying the Water Music we get an instrumental suite--an overture and several short dances--from Handel's first opera, Rodrigo, premiered in 1707. While I would have preferred hearing the more-commonly coupled Music for the Royal Fireworks, the music from Rodrigo makes a suitable companion piece.

The sound, which Naive recorded in January, 2010, is among the best you'll find in this music, especially considering the relatively large-sized ensemble involved. The sound combines warmth and clarity in equal measure for a realistic listening experience. The hall exhibits a natural ambient bloom well caught by the audio engineers, and there is a reasonable degree of stage depth to add to the stereo spread. I can't imagine anyone complaining about the sonics.