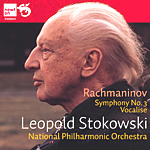 One of the advantages of being a reviewer is the joy of discovery. Of the many discs I get to audition each month, not all are interesting enough to mention at the site and only a relative few jump out and demand serious attention. Such a recording is Stokowski's Rachmaninov Third Symphony. The old maestro premiered the work in 1936, but it wasn't the hit the public expected it to be after the success of the Second Symphony. Stokowski never conducted the piece again until he recorded this performance in 1975, just two years before his death. Originally, I believe the Desmar label released it on LP, and then in 1998 EMI made it available on CD. Now we get it from Newton Classics in what appears to be the same master EMI used. So if you already have it on EMI, this one is identical.

I had never heard the recording before EMI sent it to me in '98, and it was a pleasure hearing it again recently on Newton Classics. It only takes about two minutes of listening to realize that here is something special, an unqualified recommendation with no if's, and's, or but's. The interpretation is, to say the least, highly idiosyncratic (it is Stokowski, after all), and it may not appeal to everyone grown accustomed to a more traditional approach. The Third contains none of the big, memorable themes of Rachmaninov's more overtly Romantic Second Symphony, one of the reasons it often comes off by comparison as rather humdrum and rambling. At best, say under Previn (EMI) or Ashkenazy (London), conductors have made the Third sound lush, if not always exciting. Under Stokowski, however, the Third takes on new dimensions, imbued with a passion I've never found in it before.

I've heard it said that in Stokowski's last years, when he was in his nineties, he never really had much to do with his own recordings, that the recording studio merely propped him up in front of an orchestra to wave his hands and lend his name to the production, and that technicians in a control booth later assembled the real performance. I'd say this recording puts the lie to that contention. No studio technician could have come up with the continuously challenging tempo variations, inflection changes, and rhythmic nuances that Stokowski fashions here.

The first-movement Allegro holds unlimited surprises, the slow-movement Adagio is conservative but committed, and the third-movement Allegro vivace is truly exhilarating. After his first performance of the work, Stokowski had almost forty years to think about it further. Maybe the years helped.

What's equally important, though, is the disc's excellent sonic quality, recorded by engineer Bob Auger. There is nothing of the typical studio production about it--nothing of the up-close, ultra-analytical, multi-miked, highly defined, feel-the-air-around-the-instruments characteristics so beloved of hi-fi demo enthusiasts. It merely sounds like a live orchestra. Nor is there a tremendously wide stereo separation, but, rather, the natural spread of an actual orchestra set back a short distance behind one's speakers, slightly elevated, in a conventional quarter circle. There are no sections unduly highlighted, no sudden forward placement of instruments, no holes in the sonic structure, nothing untoward in the sound at all, which in itself makes it stand out for its realism.

Of course, all of this sonic pleasantry could merely be serendipitous, a fortuitous match between my system and this particular recording. If so, lucky me. It continues to be one of the best discs I've listened to in quite a while.