North Bethesda, MD, July 8, 2010:  From July 19 to August 13, 2010, the National Philharmonic will engage some of the area's most promising young musicians through its Summer Strings and Choral Institutes. 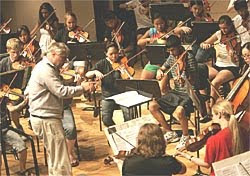 The Institutes, for middle and high school string players and high school vocal performers, nurture young talent and teach musical skills and techniques while preparing the participants for a performance. "Nurturing the next generation of audiences and performers is at the heart of our mission in the community," said National Philharmonic's Music Director and Conductor Piotr Gajewski.

The Summer String Institutes (High School String Institute August 2-6; Middle School String Institute August 9-13) immerse talented and aspiring middle school and high school string musicians in an intensive week of mentoring, chamber music coaching, individual lessons, and rehearsals led by Maestro Piotr Gajewski, National Philharmonic Assistant Conductor, and String Institutes Director Victoria Gau, musicians of the Philharmonic, and other recognized music pedagogues. Gau is also the Artistic Director and Conductor of the Capital City Symphony (DC) and is an opera coach/conductor at George Mason University. She is a familiar face in the Washington area, having conducted such groups as the Washington Savoyards, the IN-Series, the Other Opera Company (which she co-founded), and the Friday Morning Music Club Orchestra. She holds degrees in Viola Performance and Conducting from the Oberlin Conservatory of Music, where she received the Phi Kappa Lambda Prize for Musicianship.