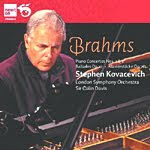 Sometimes we find fortune conspiring to produce an ideal confluence of performers in certain works.  When it happens once, we feel lucky. When it happens over and over again, as it did with pianist Stephen Kovacevich, conductor Colin Davis, and the London Symphony Orchestra, it's probably more like fate than luck. Think about it: During a period of about ten years several decades ago, Kovacevich, Davis, and the LSO gave us some of the best Beethoven Piano Concertos ever, some of the best Mozart Piano Concertos, probably THE best Bartok, Grieg, and Schumann Piano Concertos, and these two Brahms Piano Concertos. It's gratifying to have the Philips recordings of the Brahms Piano Concertos now reissued in this Newton Classics set.

Johannes Brahms (1833-1897) wrote his Piano Concerto No. 1 in 1858 when he was only in his mid twenties. The work is all craggy and monumental in scope and full of the boundless energy of youth, yet Kovacevich's playing is so fluid and assured, he makes it sound positively poetic. The opening movement, which can often appear downright dark and gloomy, Kovacevich here renders as flowing, even lilting, while still maintaining its grand dimensions.

Kovacevich makes the second movement properly elegiac, a tribute to Brahms's late mentor, Robert Schumann; and the finale is appropriately tempestuous. There's nothing inflated or overstated here, just a sensitive, self-confident account of the music, with Davis and the orchestra lending perfectly attentive and responsive support.

I've always liked Brahms's Second Piano Concerto (1881) better than the First Concerto because it sounds more obviously mature to me, more lyrical, and more tuneful. Written quite a few years after the First Concerto, the Second Concerto is unusual in its four-movement structure; Brahms included an extra movement, a Scherzo, because he thought the opening movement too simple, too plain. It is the slow Andante, however, where both Brahms and Kovacevich shine. It is absolutely heaven-sent and heavenly in its execution. Then, the final movement is light and airy, a sign perhaps that with age Brahms had grown confident enough as a composer not to have to impress audiences and critics with a continual storm of grandiose notes.

Filling out disc one, we get Kovacevich playing Brahms's Scherzo in E flat, Op. 4, and the four Ballades, Op. 4. On disc two the fill-ups are the eight short solo pieces that eventually comprised the Klavierstucke, Op. 76. As in the rest of the program, Kovacevich plays with power, grace, playfulness, authority, and intimacy, as the occasion demands.

Philips recorded the two Piano Concertos in 1979, with the Second Concerto initially sounding better than the First. Remastered on this 2010 Newton Classics set, however, I hear little of the bass overhang in the First that I noticed years ago fogging over the midrange. The only thing is that in both works, the piano is a little more forward than I like, the instrument seeming a tad bigger than the accompanying orchestra. Philips recorded the solo works digitally in 1983, and the piano sounds a trifle clearer and cleaner than in the analogue Concertos; it's not necessarily more lifelike, though, because the sound of the piano in the Concertos, while softer, displays a pleasingly realistic warmth.