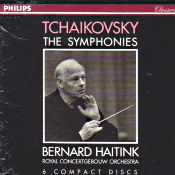 There are four of five sets of Tchaikovsky symphonies I can recommend to the buyer who is considering a complete cycle by a single conductor. On balance, however, I prefer this older analogue set with Bernard Haitink and the Royal Concertgebouw Orchestra (still available on Philips and now on Decca), both for its reasoned, yet vigorous, performances and for its warm, wide-ranging sound. The other recommendable sets include Jansons's digital set on Chandos, Muti's analogue set on Warner/EMI, Markevitch's budget-priced set on Philips, and Jarvi’s set on BIS, among several others.

So why the Haitink set? Because in the symphonies themselves Maestro Haitink produces no losers and at least three outright winners. His Nos. 2, 3 and 4 have never been bettered, and his No. 5 is among the best on disc. Nos. 1, 6 and Manfred are good serviceable accounts. And then there are the short fill-ups, of which "The Storm" is a stunner. Most of the other pieces, like the 1812 and Romeo and Juliet overtures, recorded earlier than the symphonies, are not first-rate but adequate and stretch the set's value. 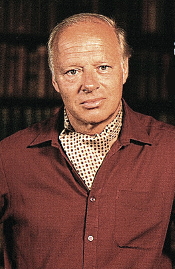 For those people who consider Haitink too cool, too reserved, especially performing works by a composer as red-blooded as Tchaikovsky, I suggest starting with the Fourth Symphony. It should end all such preconceptions. As to audio quality, the symphony recordings were made during the mid-to-late 1970's in some of Philips's best analogue sound. Really, only the Chandos set beats it sonically, and that is mainly because the Chandos sound is better imaged. The Philips engineers tended to over-mike things at times, resulting in some compartmentalization. Otherwise, the Philips sound is smooth, natural, robust, and extremely dynamic.

By comparison, the Jansons set costs more, includes fewer fillers, and has at least one questionable recording of the Second Symphony. Like Haitink, the Muti set comes at mid price, but it, too, includes fewer fillers and is less convincing in most of the works (although his Manfred and Fifth Symphonies are standouts). Markevitch has the advantage of coming on four discs at budget price, but the drawbacks are obvious: the set includes only the six numbered symphonies, two of which are split between two discs, and the 1960's sound is thinner and noisier than the competition. Still, Markevitch's interpretations of the first three symphonies in particular must be counted among the best available.

Probably the most useful advice I could give is for one to buy individual symphonies and short works disc by disc, choosing the best possible recordings by a variety of conductors. Unfortunately, Haitink, Muti, and Markevitch are currently available only in complete sets. So, I suggest buying the Haitink as core material and supplementing it with a few other individual discs by Jansons and Ashkenazy. Or check the used shops for deleted copies of single discs by Muti. But by all means check out Haitink. I don’t think you’ll be disappointed.