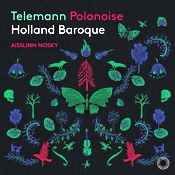 Georg Philipp Telemann (1681-1767) was the German composer who played practically every instrument in the band yet was largely self-taught. He originally wanted to be a lawyer, a course his family favored, but he turned to music while at university. He went on to become one of the most prolific composers the music world has ever known (his output numbers over 3,000 compositions), and he became friends with the likes of Bach and Handel, both of whom admired his work and considered him among the leading composers of the day.

Obviously, a man with such productive musical talents experimented in a number of genres and fashions of the time. Among these was the Polish style, inspired by a short stay in Poland and the dance music he heard there. What we have in the current album is a survey of some of Telemann’s more notable examples in the Polish style as performed by the period-instrument ensemble Holland Baroque.

Founded in 2006, Holland Baroque describe themselves as “an original and innovative baroque orchestra. The musicians use their instruments to sing, dance, cry, and laugh through tradition, innovation, surprise, and a dash of entertainment.” The players include Aisslinn Nosky, violin; Judith Steenbrink, violin; Chloe Prendergast, violin; Filip Rekiec, viola; Tomasz Pokrzywinski, cello; Christoph Sommer, lute; and Tineke Steenbrink, harpsichord. Judith and Tineke Steenbrink are the Artistic Leaders. 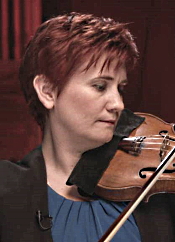 So, what exactly is the “Polish style”? According to the booklet notes it would be the style of a polonaise, which is a slow dance of Polish origin, in triple meter, consisting chiefly of a march or promenade in couples. Holland Baroque studied a number of such dances from Telemann and chose a representative sampling for our enlightenment and enjoyment. And for further illumination, they have arranged them into six suites and a chamber-music setting. There are thirty-three selections in all, each brief but entirely engaging.

The collection of tunes Holland Baroque provide is broad enough to encompass a number of varied tempos, from slow dances to quicker ones. The slower ones, like the Polonie 2 that opens the program, can be downright solemn, while others are stately and fashionable. The faster ones offer everything from a delightful lilt to a full-on romp.

Equally important, Holland Baroque play the music with vigor, enthusiasm, and sure-handed precision. Yet their precision does not rob the music of its joy. The sound of their historical instruments lends a distinct flavor to the scores, not as rich, smooth, or mellifluous as modern instruments but pleasing in its own way. It’s all quite captivating.

Recording producer Carl Schuurbiers and engineer Jean-Marie Geijsen made the hybrid SACD at Musis Arnhem, the Netherland, in August 2020. It plays in two-channel stereo and multichannel on an SACD player and in regular two-channel stereo on a regular CD player. I listened in two-channel SACD stereo using a Sony SACD player. Although the sound is a tad close, the instruments are realistically placed between the two speakers, neither clumped too closely together nor strung out in a line. The sound is natural, not at all bright or edgy, with a sweet but not too reverberant ambient glow. It’s quite attractive sound.

Email ThisBlogThis!Share to TwitterShare to FacebookShare to Pinterest
Labels: Telemann